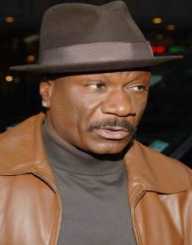 Actor Ving Rhames was born on the 12 May 1959 in Harlem,  New York City to Ernest and Heather Rhames. His parents were sharecroppers in South Carolina who relocated to New York where his father worked as a car mechanic.

Ving Rhames developed his passion for acting while studying at the New York School of Performing Arts. After graduation he studied at SUNY Purchase and then continued studying drama at the Juilliard School, obtaining a BA Fine Arts (1983).

Ving Rhames made his debut on Broadway in 1984, in The Winter Boys. Around this time he began to find work in soap operates where he refined his acting and began to make a name for himself. His breakthrough role came when he was offered a part in Pulp Fiction (1994), and at the same time he was building up following acting in the medical drama ER.