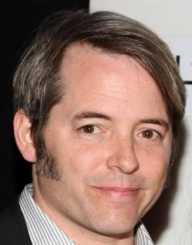 American Actor Matthew Broderick was born on March 21, 1962, to a Jewish mother and an Irish-Catholic father. Matthew was born and brought up in Manhattan, New York, where he attended the City and Country School. He completed his high school education from Walden School where acting was one of the major subjects. Broderick’s mother Patricia was a playwright, actress, and painter while his father, James Broderick was a famous actor as well as a World War II veteran.

Matthew Broderick’s acting career kicked off at the age of 17 when he appeared on HB Studio’s production of Horton Foote’s ‘On Valentine’s Day.’ Surprisingly, on his stage debut, he was cast opposite his father. Following his debut, in 1981, he was offered a supporting role in the play ‘Torch Song Trilogy’ in which he essayed the role of a gay adopted son. His performance earned him proper appreciation from acclaimed theater critic Mel Gussow and an Outer Critics Circle Award.

Next in line was the portrayal of Eugene Jerome, the central character of Neil Simon’s ‘Eugene Trilogy.’ His performance was well received, and he got the opportunity to star in the 1983 film ‘Max Dugan Returns.’ Neil Simon wrote his role and the film marked his debut on screen. Matthew Broderick’s first major hit also came in 1983 when he played the part of David Lightman, a Seattle teen hacker in the film ‘WarGames.’

But it was the 1986 comedy film ‘Ferris Bueller's Day Off’ that put Broderick in the spotlight. Matthew essayed the role of a high school student who goes to explore Chicago with his girlfriend and best friend. His irresistible charm won over the hearts of the audience and is one of Matthew Broderick’s most memorable roles till date.

In 1987, Matthew Broderick saw as an Air Force Research Assistant in the film ‘Project X.’ His exposure to dramatic acting came with the film ‘Glory’ in 1989 where he played the role of American Civil War officer, Robert Gould Shaw.

Since then Broderick has essayed many different kinds of roles in films, plays and on television. In the 90’s, he did a comedy feature film ‘Out on a Limb’; was a part of critically acclaimed films ‘Mrs. Parker and the Vicious Circle’ and ‘The Road to Wellville’; and got acknowledged for his dark comedy roles in ‘The Cable Guy’ and ‘Election.’ He has also lent his voice for Simba, Disney’s major character in the film ‘The Lion King.’ To his fans, Broderick is also known as Dr. Niko, the man who fought the monster in the 1998 film ‘Godzilla.’

Matthew Broderick has been a regular in the theater community acting in a diverse mix of plays like ‘The Odd Couple,’ ‘The Philanthropist,’ ‘It's Only a Play’ and ‘Sylvia.’ He has dubbed for many animation films like ‘The Thief and the Cobbler,’ ‘Bee Movie’ and ‘The Tale of Despereaux.’ Broderick also did guest appearances on television in popular shows like ‘30 Rock’ and ‘Modern Family.’

In recent times, Broderick has joined the cast of FX’s ‘Katrina: American Crime Story’ and is slated to play the role of a former head of the Federal Emergency Management Agency.

Matthew Broderick's most notable achievement has been a Tony Award in the category ‘Best Leading Actor in a Musical’ which he won in 1995 for his performance in the musical ‘How to Succeed in Business without Really Trying‘.

Matthew Broderick is also a Primetime Emmy Award nominee for the television film ‘A Life in the Theatre.’

To his credit, he also has a Star on the Hollywood Walk of Fame.

Matthew Broderick lives in Manhattan with his wife and actress Sarah Jessica Parker. The two met via the latter’s brother and tied the nuptial knot on 19th May 1997. Four years later, in 2002, the couple gave birth to their first child, a boy named James Wilkie Broderick. The couple then opted for surrogacy, and in June 2009 they welcomed their twin daughters - Marion Loretta Elwell and Tabitha Hodge.

Matthew Broderick has managed to keep himself free from controversies. The only infamous incident involving Broderick was the 1987 car crash. At that time, Broderick had a secret relationship with American Actress Jennifer Grey. The car crash happened when he was on vacation with the actress and revealed their relationship to the public. Although Broderick and Grey escaped the accident with some injuries, the crash proved to be fatal for the mother-daughter duo - Anna Gallagher and Margaret Doherty who were driving the other car.