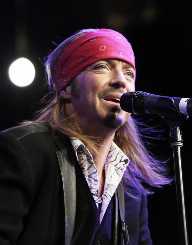 Musician Bret Michaels was born on the 15 March 1963 in Butler, Pennsylvania to Wally and Marjorie Sychak. He has two sisters Michelle and Nicole.

Bret Michaels was a fan of AC/DC, Aerosmith, and KISS and this led him to play in bands. One of his early groups was playing with Rikki Rockett, Bobby Dall and David Besselman in a band called Laser. In 1983, another version of the team was formed with Matt Smith playing the lead, and they called themselves Paris. The band moved to LA in 1984 and changed their name to Poison. After a while, Matt Smith left the group, returning home and CC DeVille joined Poison.

Poison signed a record deal with Enigma Records, and their first album was Look What the Cat Dragged in. They made a video of Talk Dirty to Me (1987), and after that, the album went platinum. Later that year at a Madison Square Garden concert, Michaels collapsed on stage, and it was then revealed that he had gone into insulin shock. Around this time he broke up with his girlfriend Tracey Lewis and the drama of it produced Every Rose Has Its Thorn (1988). Poison’s second album Open Up and Say. Ahh! Was another success and their third Flesh & Blood also went platinum. The tension between Michaels and DeVille caused the latter to leave Poison in 1991. Richie Kotzen replaced him on Native Tongue and Blues Saraceno on Crack a Smile. More! In 1999, he mended fences with CC Deville rejoined Poison, and they did a reunion tour.

Bret Michaels released a solo album in 1998. It was entitled A Letter from Death Row and was the soundtrack of a film he starred in, directed and wrote.

In 2000, his album Show Me Your Hits was released, it contained Poison classics with a new spin. Songs of Life came out in 2003. Which included a song about for his daughter Raine and the 9/11 inspired One More Day. In 2005 he was a judge on Nashville Star, a reality television show. In 2008, Rock My World, part of his television show Rock of Life. Rock My World reached number four on the Top Independent Albums chart. Bret Michaels released three singles in 2010: Nothing To Lose, Lie To Me and Wasted Time, all from his album Custom Built. Custom Built was a huge success and hit number one on the Top Hard Rock Albums chart. Michaels did a True Grit solo country rock tour in 2015. He continued touring and releasing music throughout the decade.

Poison dominated that heavy metal music scene in the 1980s and 1990s. They sold tens of millions of albums worldwide and many hit singles. In 2006 a poll ranked Michaels as the best heavy metal singer and frontman in the history of the genre.

Tracey Lewis, one of his early girlfriends, inspired the breakup song Every Rose Has A Thorn.

In the 1990s Bret Michaels met Susie Hatton, and they became partners. He wrote most of the songs for her 1991 Body & Soul album and also produced it. It was not a commercial success.

Michaels was in a long-term relationship with Kristi Lynn Gibson, and they had two daughters together, Raine (b.2000) and Jorja (b.2005). The couple split up in 2012. Michaels then had a relationship with Pamela Anderson, and this resulted in the sex tape scandal which they had made. The tape appeared on the internet, and legal action was taken.

As a child, Bret Michaels was diagnosed with Type 1 diabetes. In 2010 he had a brain hemorrhage, and later that year he had another health issue when he experienced numbness in his body. It was found that he had a hole in the heart which required surgery.

At the Tony Awards in 2009, Bret Michaels was injured when performing with Poison when a piece of the set collapsed the hit him on the head. Later when he experienced a brain hemorrhage in 2010, he filed a lawsuit against CBS and the Tony Awards. The case was settled between the parties without the amount involved being made public.

This was a reality television dating show with contestants competing to be Michael’s girlfriend. The show ran for three seasons (2007-2009), and Bret Michaels moved on to Bret Michaels: Life As I Know It. This debuted October 2010 and ran on a weekly basis. It gave an insight into Michael’s life, family, friends, and associates. The theme song for the show was Riding Against The Wind from his Custom Built album.

Bret Michaels won the third season of Celebrity Apprentice in 2010. In 2013, he was fired from the same show, saying later that he did not think Trump was serious when he did so.