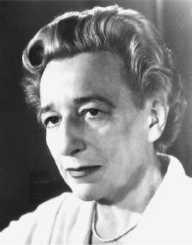 Lillian Hellman was born on June 20, 1905, in New Orleans, Louisiana, USA. Her parents were Julia (Newhouse) and Max Hellman.

Lillian Hellman started from almost nothing but grew to be one of the most successful women playwrights of the 20th century. One of her first writing jobs was at MGM, the film company. There, she wrote summaries of books that would later be turned into films. Her first play on Broadway, the Children’s House, debuted in 1934. The play was famous on the stage. However, there were lesbian characters in the play, which got the play banned in several large cities, including Chicago and London.

At the time, gay people were not treated well, and so her play could not be made into a film unless it was censored (which it later was by Hellman herself in 1936, and released under a new name, These Three). After the success of her play, she was hired by Goldwyn Pictures to write a screenplay for The Dark Angel. Her other famous screenplays are listed below.

During World War II, Lillian Hellman began to focus more on writing plays. One of her famous World War II-era plays was Watch on the Rhine. After the war, she continued to write plays, instead of writing screenplays. Some of her plays are listed below.

In the later years of her film and theater career, Lillian Hellman wrote several memoirs and one novel. Her novel was titled Maybe: A Story. Some of her memoirs are listed below.

Lillian Hellman won the New York Drama Critics’ Circle Award for Best American Play for two of her plays, Toys in the Attic and Watch on the Rhine.

She won the American Academy of Arts and Letters Gold Medal for Drama in 1964. From the same group, she won the award for Best nonfiction book for her autobiographical work, An Unfinished Woman: A Memoir.

Lillian Hellman joined the Screenwriters Guild in 1935. There, she worked hard to get screenwriters credited for the work they did for films. In 1936, she helped to form the Contemporary Historians, Inc., which wrote and filmed movies like, The Spanish Earth.

Lillian Hellman was first married in 1925, to Arthur Kobel. However, the marriage ended in 1932. In 1931, shortly before the end of her first marriage, Lillian began seeing an author named Samuel Dashiell Hammett. The two were in a serious relationship for over thirty years but never married. She never had any children.

Lillian Hellman died of a heart attack on June 20, 1984, at Martha’s Vineyard (Oak Bluff, Massachusetts, USA). She was 79 years old when she passed away.