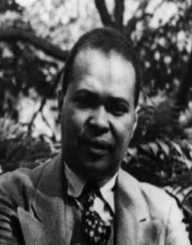 Countee Cullen was a distinguished African-American author active during the Harlem Renaissance.

Countee Cullen’s birthdate is May 30, 1903. His exact birthplace is not certain. It is assumed that it is either Louisville, Maryland, Baltimore, or New York City. He moved to Harlem with his grandmother when he was nine years old. After her death, he was adopted by Reverend Frederick Cullen.

Countee Cullen studied at the DeWitt Clinton High School in The Bronx. He achieved great academic success. He won a citywide poetry contest, and he became an editor of the school newspaper. He graduated with honors in Latin, Greek, and French.

After high school, Cullen enrolled at New York University. There, he regularly participated in poetry contests. In 1925, he won the Witter Bynner Poetry Prize. Various literary magazines started publishing his work. Upon graduation, he was selected as an honor student by the Phi Beta Kappa academic society.

Countee Cullen continued his education at the prestigious Harvard University. He graduated with a master’s degree in English in 1926.

Countee Cullen published his first book while he was still in university. Named “Color,” the book mostly revolves around the issues faced by African Americans. He wrote about the injustice they dealt with in their daily lives.

He also described their desire to feel connected to their African roots, but that was difficult because they had been forced to leave the continent a very long time ago.

In 1927, Countee Cullen published the collection Copper Sun, in which he described the need for love in the world.  He also called for unity between black and white people. In 1929, he released the collection The Black Christ. In it, he explored the notions of justice and faith in the black community. He also compared the suffering of Jesus Christ during his crucifixion to the oppressive suffering endured by his people.

In 1928, Countee Cullen won the Guggenheim Fellowship which gave him the opportunity to work abroad. He spent the next six years going back and forth between France and the United States. From 1934 until the end of his life, he taught English, French, and creative writing at the Frederick Douglass High School.

In 1932, Countee Cullen wrote his first novel, One Way to Heaven. It was a comedic representation of lower-class blacks and upper-class inhabitants of New York City. Later, he wrote two children’s books: The Lost Zoo, and My Lives and How I Lost Them.

Cullen’s work combined elements of African-American culture and classic European literature. His early and most famous works focused on the problems of the black community. Later, he drifted away from this theme and started writing about general topics such as love and beauty.

Cullen was at the forefront of the Harlem Renaissance. This was a movement that celebrated African-American culture. It marked a period of rapid creation of artistic and literary works. Some praised him for his depiction of the injustice on black people. Others accused him of trying to distance himself from the race because he used classical language instead of slang typical for their communities.

In 1928, Countee Cullen married Yolande Du Bois. She was the daughter of prominent civil rights activist William Edward Burghard Du Bois. Their wedding was a tremendously important event in the black community. Different African-American publications reported the details of the ceremony. More than three thousand people appeared at the church.

Despite the lavish celebration, the marriage did not last. It ended with a divorce only two years later, in 1930. The apparent reason for the separation was Cullen’s homosexuality. Despite the gossip, he remained quiet about his private life and he never publicly disclosed his relationships.

Countee Cullen passed away on January 9, 1946, due to high blood pressure. He was buried at the Woodland Cemetery in The Bronx.