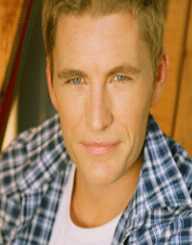 Brett Alan Tucker was born to Ken and Janice Tucker on 21st May 1972. Born in Melbourne, Australia, he was brought up in the Yarra Valley of Victoria with his two brothers Mark and David and sister Nicky. Nicknamed Boonge, Brett studied performing arts at the National Theater Drama School in Melbourne. He graduated from the school in the year 1996.

Brett Tucker made his acting debut in 1994 with the TV series ‘Snowy River: The McGregor Saga.’ After his debut, he was seen on TV films and shows like The Last of the Ryans (1997), State Coroner (1998) and Thunderstone (1999). He landed a recurring role on the show ‘Blueheelers’ in the year 1998. In the year 1999, he began portraying the character of Daniel Fitzgerald in the Australian television soap opera ‘Neighbours.’

Soon after that, in 2001, Brett Tucker bagged the leading role of Max Regnery in the famous children’s television show ‘The Saddle Club.’ This role cemented his position on the small screen. In the years 2000-2001, he was seen in a variety of television flicks like ‘Halifax f.p: The Spider and the Fly,’ ‘Code Red’ and ‘Blonde.’

Brett Tucker's film debut came in the year 2001 with the movie ‘Mall Boy.’ He essayed the role of Darren, and this portrayal earned him critical acclaim and worldwide fame. The film and his performance received thundering applause at the Cannes Film Festival.

After his three-year-stint at the hit TV show ‘The Saddle Club,’ Brett Tucker was again seen as a vet named Dave Brewer on the Australian drama ‘McLeod’s Daughter.’ Brett’s research for this role included an apprenticeship under a real veterinarian. The show aired from 2003 to 2006. During this time, he was also seen once more in ‘Neighbours’. In 2009, Brett announced his plans to move to the USA with the aim of giving a boost to his career.

The 6 feet 2-inch tall guy finds it difficult to cope with the city life and often travels back to his country life whenever he feels homesick. Brett Tucker even denied a significant role that required him to shoot continuously for 49 weeks at the US. Brett was also seen in a minor role in the film ‘The Great Raid’ starring Benjamin Bratt and has done a film opposite Naomi Watts titled ‘The Outsider.’ He has also done theater and has to his credits the plays ‘The Great Gatsby’ in 1997 and ‘The Woman in Black’ in 2006.

Apart from acting, the Australian hunk has also crooned two songs and performs with a band named ‘The Budgie Smugglers'. Aussies Bernard Curry and David Hoflin are the other band members. Brett Tucker is a trained horse-rider and an accomplished sportsperson. He plays different types of sports such as tennis, cricket, basketball, football and is currently learning snowboarding.

One of Brett Tucker's highly publicized affairs was with Australian actress Eliza Taylor in the year 2008. The actress was 17 years younger to Brett, and they were in a live-in relation. The relationship was short-lived. In 2011, rumours were rife about him dating Lindsay Lohan. However, the rumoured association also ended after a year. As per friends and media reports, Brett Tucker is currently dating actress Trilby Glover, and the couple plans to tie the knot soon.