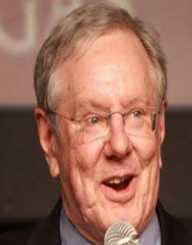 Businessman Steve Forbes was born Malcolm Stevenson Forbes Jr. on the 18 July 1947 in Morristown, New Jersey. His father was Malcolm Forbes, and he is the grandson of the founder of Forbes magazine, B.C. Forbes. His mother was Roberta Remson. Forbes has two brothers, Christopher and Timothy.

In 1966, Steve Forbes graduated from Brooks School, North Andover, Massachusetts and then obtained a BA in history from Princeton University. At university, he founded Business Today, a publication which became the largest magazine published for students. Business Today is still published on the campus.

In the mid-1980 Steve Forbes was appointed as chairman of the Board for International Broadcasting by President Ronald Reagan. As chairman, he was involved in the operation of Radio Free Europe and Radio Liberty which broadcast from behind the Iron Curtain. Forbes was reappointed to the role by President Bush and continued in the position until 1993.

In 1990, Forbes became President and Chief Executive Officer of Forbes as well as Editor-in-Chief of Forbes magazine. He has held the role since then, taking a leave of absence in 2000 when he was campaigning for the Republican presidential nomination. He is also chairman of the group’s American Heritage division which publishes American Heritage magazine, American Legacy and American Heritage Invention & Technology. Forbes magazine has a circulation of 850,000 which together with Forbes Global have a readership of five million.

Steve Forbes campaigned in 1996 as well as 2000 for the Republican nomination for the U.S. Presidency. His focus was on a flat tax, a new Society Security system for working Americans, strong national defence, medical savings accounts, and term limits. He also advocated that parents be given the choice of schools for their children. He was honorary chairman of Americans for Hope, Growth, and Opportunity (1996-1999), an advocacy organisation focused on advancing pro-growth, pro-freedom and pro-family issues.  He was also chairman of the board of Empower America, a political reform organisation (1993-1996).

Steve Forbes is on the Board of Trustees of Princeton University, The Ronald Reagon Presidential Foundation, and the National Taxpayers Union. He has honorary degrees from numerous institutions including the New York Institute of Technology, Westminster College, Jacksonville University, Sacred Heart University, and New Hampshire College. As a writer, Forbes has won four Crystal Owl Awards for expertise in economic forecasting.

Steve Forbes and his wife Sabina Beekman, who married in 1971, have five daughters. Moira is the founder of the Forbes Executive Women’s board and publisher of Forbes Woman, Catherine is an actress and film producer. Elizabeth and twin daughters Roberta and Sabina are the other children.
Forbes 2017 network was estimated at US$430 million. @SteveForbesCEO has 225K followers on Twitter.