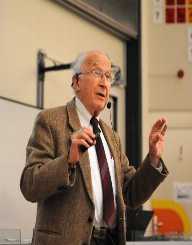 Roald Hoffmann was the joint recipient of the 1981 Nobel Prize in Chemistry with Japanese Chemist Kenichi Fukui for their theories developed independently concerning the course of Chemical reactions. He is the Frank H. T. Rhodes Professor of Humane Letters, Emeritus at Cornell University, New York. He is well known in the scientific world for his contributions to theoretical and Applied Chemistry.

Roald Hoffmann was born on 18 July 1937 in Zolochiv, Poland (now Ukraine). He belonged to a Jewish family and was named after the famous explorer Roald Amundsen. His father was Hillel Safran, a civil engineer, and his mother Rosen, a teacher. The invasion of Poland by Germany during the World War II caused his family to be placed in a labor camp. His father arranged for the escape of Roald with his mother and few relatives. They were helped by a Ukrainian neighbor Mykola Dyuk to hide in the attic and storeroom of the local schoolhouse.

Their father was killed in the labor camp. Roald’s mother concealed her grief at her husband’s death and taught young Roald. Roald Hoffmann was made to memorize from the books in the storeroom and quizzed later.  Roald with his mother and relatives lived in hiding from Jan 1943 till the Red Army freed them in June 1944.

In 1946 Roald Hoffmann and his mother shifted from Poland to Czechoslovakia, Austria and then Germany. His mother married Paul Hoffmann who was a gentle and loving father. Finally, in 1949 they migrated to The United States in the troop carrier “Ernie Pyle.”

Roald Hoffmann was a very bright and intelligent student. He graduated from Stuyvesant High School, New York in 1955. He won the Westinghouse Science Scholarship This enabled him to study in reputed institutions like Columbia and Harvard. In 1958 he graduated from Columbia University majoring in Chemistry. He enrolled at Harvard University and obtained his post-graduate degree in Physics from Harvard in 1960 and a Ph.D. in Chemical Physics in 1962.

Roald Hoffmann remained in Harvard for three years from 1962 accepting the post of Junior Fellowship in The Society of Fellows at Harvard. His area of interest shifted to Organic Chemistry. His research was in the electronic structure of stable and unstable molecules. He conducted research on the extended Huckel method and towards the end of his fellowship collaborated with the chemist R. B. Woodward.

With Woodward, Roald Hoffmann developed the Woodward Hoffmann rules for elucidating chemical reaction. Using this rule, they could predict subtle symmetries and asymmetries in the electronic orbitals. For this work, he received the Nobel Prize which was shared with the Japanese Chemist Kenichi Fukui who had independently resolved similar issues. Woodward was not included in the Prize since it is given to only living persons.

Roald Hoffmann has won many awards in the field of Science and 25 honorary degrees. The awards include Award of the International Academy of Quantum Molecular Science (1970), National Medal of Science (1983), Priestly Medal (1990), Pimentel Award in Chemical Education (1996), James T Grady – James H Stack Award for Interpreting Chemistry (2009) to name a few. He also won the Arthur C Cope Award in Organic Chemistry with Woodward in 1973 and the Society’s Award in Inorganic Chemistry in 1982. He is the only person to receive two awards in different subfields of this Science. He is also a member of the International Academy of Quantum Molecular Science and Board of Sponsors of the Bulletin of the Atomic Scientists.

The American Chemical Society held a symposium to honor Roald Hoffmann on his 70th birthday on Aug 2007.

Roald Hoffmann is also interested in poetry and arts. His collections of poems include The Metamict State, Gaps & Verges and Chemistry Imagined. He has also hosted a 26 program series on “The World of Chemistry” and is a host of the monthly series “Entertaining Science.” He has published books “Roald Hoffmann: On the philosophy of art and science of chemistry” and ‘Beyond the finite: The sublime in art and science.’

Roald Hoffmann has co-authored the play “Oxygen” with Carl Djerassi. Other plays by him are “Should’ve” (2006) about ethics in science and art and “We have something that belongs to you” (2009) based on his experiences in the Holocaust.

Roald Hoffmann married to Eva Bojesson in 1960, and they have two children Hillel Jan and Ingrid Helena. Hoffmann visited Zolochiv with his son in 2006. He found that the attic he had hidden in was intact. Ironically the storeroom had been converted to a chemistry classroom. He initiated a monument to be erected in 2009 to honor Holocaust victims.