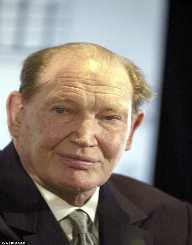 Kerry Francis Bullmore Packer was born on December 17, 1937, in Randwick, New South Wales, Australia. Packer was considered to be one of the most influential and most affluent of all men in Australia upon his death. At the time of his death, Business Review Weekly did estimate his fortune to be worth roughly $6.5 billion. Packer was one of Australia’s leading and most powerful of all media proprietors.

He had only one brother named Clyde who was older than him. As a youngster, Packer loved sports and took a wide range of sports up in school from boxing to rugby to cricket.

Kerry Packer suffered academically in school due to having dyslexia which was not diagnosed. Packer’s father would die in 1974, and as a result of this, Kerry would go on to inherit the family estate that was valued at $100 million. Australian Consolidated Press and the Nine Network as passed directly to the younger Packer. The reason that the elder son Clyde Packer didn’t inherit the estate was that his father fell out with him in 1972.

Kerry Packer inherited his father’s media empire upon his death. He also managed to do other things to enhance business on all fronts for not just Australian Consolidated Press and the Nine Network. Some of the other achievements that Packer did make for himself were accomplishments that others had not made.

He was famous for his entrepreneurial skills and ability to carry out smart deals. However, as equally as notable about them, was also his lavish lifestyle and harsh personality. He knew how to make money and was able to make money whenever the need did arise for him to do it.

Kerry Packer was indeed an outstanding businessman in every way. The facts do indeed speak for themselves. Nonetheless, other than being a media tycoon, he was also the first entrepreneur to ever make money by telecasting cricket on television.

It was the very thing to spark people’s interest in the sport as a rule. Packer used his family’s company called Consolidated Press Holdings to get the event going on TV. Consolidated Press Holdings was the major shareholder. Publishing and Broadcasting Limited held a 37% holding in the deal as well. It was PBL that did have ownership of the Nine television network up until Packer’s death.

PBL also controlled Australian Consolidated Press which is responsible for producing a lot of the top magazines that are distributed throughout Australia. Packer was also involved in a string of other business developments in addition to the media. Some of these other business ventures were of the gambling and tourism category. One of the most notable of all these ventures was no different than the Crown Casino in Melbourne.

Although he was known for being a very astute businessman, Kerry Packer was by no means a self-made man. He was someone who did make good investments. But the truth be known. It was his grandfather and father who built the Packer media empire from the ground up. The Packer media empire and its associated holdings took many decades to become what it became.

Robert Clyde Packer and Sir Frank Packer were the original builders of the Packer fortune and legacy. Packer also wasn’t the first choice when it came to the running of the family’s business empire; The first choice was to be Kerry’s older brother Clyde would’ve taken over the company.

However, as was previously stated, he had a falling out with his father and left Australia. Kerry Packer’s independent business life didn’t begin until after his father’s death in 1974. Kerry Packer started out working for his father in the loading dock that belonged to the Sydney newspaper called The Telegraph. He had a job loading papers. Sir Frank Packer wanted him to experience working in the newspaper industry from the ground up.

Kerry Packer had a hands-on type of business approach that was distinctly his very own. Although he wasn’t as hands-on as was Rupert Murdoch, he was known to take an interest in his editorial content.

He also was said to interfere with the programming for his TV stations occasionally. It was noted that Packer would often manipulate many broadcasts that involved cricket. He did this because he wanted to make sure that the end of the cricket match was appropriately broadcast.

Away from Australia, Kerry Packer was known for founding the World Series Cricket, and that took place in 1977. In 1977, the Nine Network had a cricket rights deal that somehow leads to a confrontation with cricket authorities.

He along with top players from many countries did meet to join him at the cost of their international sides. Packer’s influence did garner him the distinction of being one of the most influential figures in the history of the sport upon his death on December 26 of 2005.