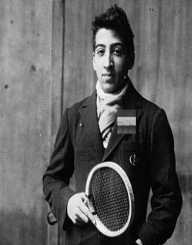 French tennis player and founder of the brand Lacoste, Rene Lacoste was born Jean Rene Lacoste on the 2 July 1904 in Paris, France.

At fifteen, Rene Lacoste began playing tennis. By 1923, he was selected for France’s Davis Cup team and in 1924, reached his first final at Wimbledon, losing to Frenchman Jean Borotra. In a rematch in 1925, Lacoste won the title. The same year, he won his first French Championship.

Rene Lacoste retired from tennis in 1929. He was dubbed The Crocodile by the American media after they heard that he had made a bet with a fellow team member regarding a crocodile-skin suitcase as a reward for winning a particular match. The nickname stuck and later, Lacoste used the crocodile image as part of the trademark logo for his business.

In 1932, Rene Lacoste and Andre Gillier founded an apparel company, La Societé Chemise Lacoste,  manufacturing a polo shirt which Lacoste preferred to wear when competing. He had designed the shirt himself and first wore it at the US Open Championship in 1926. The small green crocodile logo was the first brand logo to appear on the outside of a garment.

In 1958, the company began selling footwear. They were also working on obtaining a patent for a tubular steel tennis racket. The racket sold under the Lactose label in Europe and the United States it was distributed and marketed by Wilson Sporting Goods. The Wilson T-2000 became popular after it was used by Americans tennis champions  Jimmy Connors and Billie Jean King.

In 1963, Rene Lacoste's son Bernard took over as CEO of the company. By the mid-1990s, the company had sold over 300 million shirts and today sells swimsuits, sportswear, shoes, caps, and fragrances. In 2005,  Bernard Lacoste (b.1931-d.2006) fell ill, his brother Michel took over the management of the company. Then in 2012, Lacoste was bought by the Maus Freres group.

Rene Lacoste was married to Simone Thion de la Chaume. They had a daughter Catherine who won the US Women’s Open in 1967. The couple also had three sons. Towards the end of his life, Lacoste had prostate cancer. Rene Lacoste died on the 12 October 1996 while recovering from surgery on a broken leg.

Rene Lacoste was inducted into the International Tennis Hall of Fame in 1976. He won a bronze medal at the 1924 Summer Olympics Games.