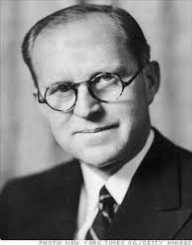 Joseph P. Kennedy Sr. was born on September 6, 1888. He was an American Businessman. He was also a Politician. He was renowned for his high profile the United States Political Positions. He died at the age of Eighty One years.

Joseph P. Kennedy Sr. was born Joseph Patrick Kennedy on September 6, 1888, in Boston, Massachusetts. He was born to Patrick Joseph Kennedy who was a politician and Mary Augusta Kennedy. He was brought up alongside three siblings. He later joined Boston Latin School. Here he was elected the class president. He after that enrolled at the Harvard College to pursue Economics. He then joined Delta Upsilon International fraternity. In 1937, he was awarded the Doctorate of Law Degree by the Oglethorpe University.

Joseph P. Kennedy later studied business and investing. He after that became a renowned investor investing in real estates and other businesses. In 1912, he worked as a state-employed bank examiner. In 1913, he became the Columbia Trust Bank President. He later became the Fore River’s assistant general manager.  In 1919, he then joined the Hayden, Stone & Co.’s stock brokerage firm. In 1923, he quit Hayden and started up his own business.

In 1933, Joseph P. Kennedy alongside James Roosevelt II founded Somerset Importers which was an American Agent for some drink companies such as the Gordon’s Dry Gin, Dewar’s Scotch and Haig & Haig scotch. In 1932, he started his political career by supporting Franklin D. Roosevelt in his presidency candidature. He was a member of the Democrat political party. In 1934, he became the Securities and Exchange Commission’s chairman after its foundation by the Congress.

In 1914, Joseph P. Kennedy married Rose Elizabeth Fitzgerald with whom he had nine children. He died on November 18, 1969, in Hyannis Port, Massachusetts in the United States. He died at the age of Eighty one years old.