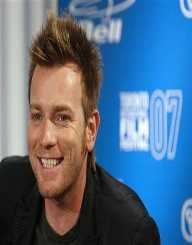 Scottish actor Ewan Gordon McGregor was born on March 31, 1971. He was brought up in a market town Crieff, where his mother worked as a teacher. She later went to work as deputy headteacher of Kingspark school in Dundee. His father is a retired physical education teacher. McGregor has an older brother, who used to be a pilot in the Royal Air Force.

McGregor studied at the Morrison’s Academy in Crieff but left school when he was 16 years old. He started to work as a stagehand in Perth Repertory Theatre and took a foundation course in drama at Kirkcaldy College of Technology. When McGregor was 18 years old, he moved to London to study at the Guildhall School of Music and Drama.

Just several months before graduating from Guildhall, Ewan McGregor auditioned and won the role in Channel 4 series Lipstick on Your Collar. The same year he also starred in the BBC’s adaption of Scarlet and Black and made his film debut in the film Being Human.

In 1994, McGregor met the film director Danny Boyle to work on the film Shallow Grave. But the next Boyle’s film - Trainspotting was McGregor’s significant breakthrough. After this successful project, McGregor was cast in the blockbuster Star Wars: Episode I- The Phantom Menace, and later also starred in two more movies of the franchise. He was also the male lead in Moulin Rouge.

His most significant projects since then include Michael Bay’s The Island, 2005 film Stay, and in 2009 he starred in Dan Brown’s film adaptation Angels & Demons. He has also voiced a role in Robots and has been the narrator in Astronaut, film for the National Space Centre. Ewan McGregor’s latest film projects include action film Mortdecai, The Impossible, and T2: Trainspotting 2, which is coming out in 2017. He made his directorial debut in 2016 film American Pastoral.

In 2008, McGregor starred in Othello at the Donmar Warehouse.

In 2004, Ewan McGregor and his best friend Charley Boorman and cameraman Claudio von Planta undertook an international motorbike trip. The group started in London and went through Central Europe, Asia, and Canada, to finish in the USA. The cumulative distance was 35,969 km. The project included visiting several UNICEF programs and formed the basis of TV project Long Way Round. The team reunited again in 2007 to travel from Scotland to Cape Town.

In 2012, McGregor appeared in documentary Ewan McGregor: Cold Chain Mission. In the film, McGregor travels on a motorbike, by plane, boat or even on foot to deliver vaccines to remote parts of India, Nepal, and the Republic of Congo. He is an ambassador for UNICEF.

On the set of Kavanagh QC, McGregor met his future wife Eve Mavrakis, who is a production designer. They have four daughters, one of them is adopted from Mongolia.

In 2007, McGregor publicly announced that he has been sober for seven years. He had a period in his life, where he was drinking every day and was barely functioning. He was a part-owner of a production company Natural Nylon. The primary goal for the company was to make films that do not conform to Hollywood standards. He left the company in 2002. Ewan McGregor is also the Officer of the Order of the British Empire, which was awarded to him in 2013 for his services to drama and charity.