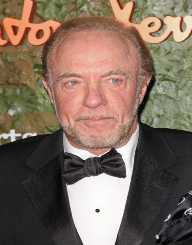 American actor James Edmund Caan was born in The Bronx, New York on the 26 March 1940. Caan’s parents were Sophie Falkenstein and Arthur Caan who were both immigrants from Germany.

Attended Michigan State University where James Caan studied economics. He later enrolled at Hofstra University where he became interested in acting and won a place at Sanford Meisner’s Neighborhood Playhouse. Caan did well and was awarded a scholarship to study under the acting coach Wynn Handman.

Caan’s acting career started with roles in off-Broadway productions. His first film was Irma la Douce (1963). He then appeared in Red Line 7000 (1965) and El Dorado (1967). In El Dorado, he worked with Robert Mitchum and John Wayne. In 1968 Caan had a role in Journey to Shiloh, and then he did The Rain People in 1969. He played Chicago Bears player Brian Piccolo in Brian’s Song (1971). Brian’s Song was a talented player who lives was cut short by cancer after turning professional.

Caan's breakthrough role as Sonny Corleone in the blockbuster The Godfather (1972) for which he won a Best Supporting Action nomination. In 1974, he reprised the role in The Godfather: Part 11. Caan was worried about being typecast, but from then onwards until 1982 he appeared in a wide range of films including the acclaimed The Gambler (1974), Funny Lady (1975) with Barbra Streisand, Rollerball (1975), The Killer Elite (1975) and Comes a Horseman (1978).

After the death of his sister Barbara, James Caan suffered from depression.

The International Karate Association awarded James Caan the prestigious title of Soke Dai. He trained in the Gosoku Ryu style for more than thirty years and is a 6th rank black belt.

Charities that Caan supports include the Dream Foundation and Pro Dono.

In the early, to mid-1980s James Caan experienced problems with depression and anger management. He had a few issues with the law, and he also lost his sister who died of leukemia. His return to acting in 1987 was due to financial problems because his assets had been misappropriated. Caan had a few more issues with the law, and in 1995 he entered drug rehabilitation.