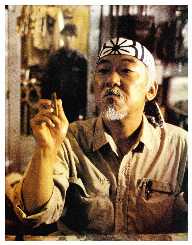 Noriyuki Morita was born on June 28, 1932, in Isleton, California, USA. He later began using the name Pat Morita for his stage name, which is the name he is now best known for.

Pat Morita had more than just a troubled childhood. As a toddler, he was diagnosed with spinal tuberculosis, and shortly after, he was sent to a sanitarium for treatment, where he stayed for almost ten years.

Later on, his family was held in an American internment camp, which was also the fate of many Japanese and Japanese-American (or families that looked Japanese) families during and following World War II. Once released, his family moved to Fairfield, California.

As a teenager, Pat Morita took on a job working in his family’s Chinese restaurant. He also spent some time as a young adult working on farms and in corporate settings.

Pat Morita’s acting didn’t begin until he was over 30 years old, in the 1960’s. His first acting career was in a small part in the film, Car Thieves, in 1964. For the rest of the 1960’s, Morita spent much of his time playing stereotypical Asian characters. Some examples include his character of Toshi in The Outsider, Wong in The Shakiest Gun in the West, and Oriental #2 in Thoroughly Modern Millie.

While Pat Morita didn’t have large roles in the 1960’s, he had just enough roles to gain him the attention he needed to continue his acting into the 1970’s. During this decade, he played mostly bit characters for an episode or two at a time in various television shows, including The Bill Cosby Show, The Odd Couple, Columbo M*A*S*H, and Starsky and Hutch. In 1974, he even earned a recurring role on the show Sanford and Son as Ah Chew. He kept this role until 1976. In the same year, Pat Morita also earned a recurring role as Taro Takahashi on Mr. T and Tina. The next year, he had another recurring role as Arnold in Blansky’s Beauties. During this decade, he also had several small parts in films, including in Midway, Cops, and Every Little Crook and Nanny.

The 1980’s was possibly Pat Morita’s busiest decade. For the earliest years of the decade, he continued to work mostly as bit characters in television shows like Laverne & Shirley, Magnum, P.I, and Aloha Paradise. He also had a recurring role on the show Happy Days as Arnold, which he kept until 1983 (which began in 1975). However, Morita’s biggest claim to fame was his role as Mr. Miyagi in the 1984 film, The Karate Kid. He would later go on to play the same role in The Karate Kid Part II and III. Pat Morita also voiced the same character on the animated television series. He also had a major role in the television show, O'Hara, as Lt. O’Hara for two years, from 1987-1988.

In the 1990’s, Pat Morita resumed working mostly as bit characters in television shows and films. He appeared in shows like Harry and the Hendersons, Space Rangers, The Fresh Prince of Bel-Air, and Murder, She Wrote. He also had roles in both made-for-television films and feature films, like Sangokushi, American Ninja 5, The Next Karate Kid, Captured Alive, and Inferno.

Pat Morita continued to act until his death in 2005. However, several of the projects he was working on was released after his death. Some of his works from 2000 on onward include House of Luk, The Center of the World, Baywatch, Down and Derby, and Spymate.

Even though Pat Morita’s career was long, he did not have many awards to show for it. So, his award nominations are listed below.

Pat Morita was first married to Kathleen Yamauchi in 1953. This couple had one daughter together: Erin Morita. However, the couple later divorced in 1967. He then remarried in 1970 to Yukiye Kitahara. This couple had children together: Tia and Aly Morita. This couple also divorced, in 1989. He married for the last time to Evelyn Guerrero. This marriage ended with Morita’s death in 2005.

Pat Morita died on November 24, 2005. His cause of death was kidney failure. He was 73 years old when he passed away.