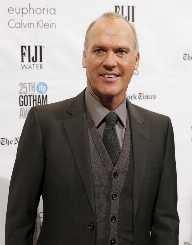 Michael Keaton was born Michael Douglas on 5 September 1951 in McKees Rocks, Pennsylvania USA. His parents were George A. Douglas and Leona Loftus. Michael was one of seven children in the family. George A. Douglas worked as a civil engineer and Leona Loftus was a homemaker. The family settled down in Robinson Township, Pennsylvania and this is where Michael Keaton went to school. As a child, Michael showed a comic streak and enjoyed doing stretches to amuse people. He sometimes wondered about becoming a standup comedian when he grew up.

Michael Keaton attended Montour High School in Robinson Township, Pennsylvania. After high school, he enrolled at Kent State University, where he studied speech for two years. He dropped out before completing his degree.

After dropping out from Kent State University, Michael returned home to Pennsylvania. There he tried his hand at standup comedy but without much success. In 1972 he joined WQED Radio, Pittsburgh’s major public station where he worked on the production side. He had a breakthrough when he appeared in episodes of the children’s television show Mister Roger’s Neighbourhood. Michael then decided to try his hand at acting in LA. He moved to LA in 1975. It was around this time that he changed his surname from Douglas to Michael. The reason given is that Michael Douglas, the son of actor Kirk Douglas, was already making a name for himself in Hollywood.  There was also television talk show host Mike Douglas. It is said that being a fan of Diane Keaton, Keaton liked the name. Hence Michael Keaton. In LA Michael appeared in several popular television shows including Maude (1977) and the Mary Tyler Moore Show (1979). Michael Keaton also toured with a comedy troupe, Angeles’s Second City. Michael Keaton’s break came when he was offered a role playing opposite John Belushi in the television show Working Stiffs (1979). This role showcased Michael Keaton’s talent and led to other roles.

Michael made his first movie appearance in Night Shift (1982). Mr. Mom followed in 1983, Johnny Dangerously in 1984 and Gung Ho in 1986. Michael was offered the role of lead in Beetlejuice (1988) directed by Tim Burton. This performance won Keaton a Best Actor Award from the National Society of Film Critics. Tim Burton then cast Keaton in the role that would bring him worldwide fame, a remake of Batman (1988). The sequel Batman Returns followed in 1992.

Michael continued working throughout the 1990s including playing a tabloid writer in The Paper (1994) followed by roles in Speechless (1996), Multiplicity (1996), Jackie Brown (1997) and Desperate Measures (1997). Keaton then took a break from film-making. He had a role in the telemovie Live From Baghdad (2002) which won him a Golden Globe nomination.  He appeared in Game 8 (2005) playing a Broadway playwright and in  White Noise (2005), a paranormal disaster film.  Various other work involved voice for some video games and his voice was used in the Toy Story animated films.

The Merry Gentleman (2009) was about a depressed hitman. This was Keaton’s debut as a director, and he also played the lead role. Birdman (2014).  Recent Michael Keaton films include The Vulture in Spider-Man The Homecoming (2017), the role of Stan Hurley in American Assassin (2017), and The Founder (2016), the story of Ray Kroc and the founding of the McDonald’s Fast Food chain.

Night Shift (1982) was a pivotal film in Keaton’s early career. This Ron Howard directed comedy was a success, received good reviews and still maintains a  very high approval rating at websites like Rotten Tomatoes.
Mr. Mom (1983) a film about a man who takes over the care of the children after losing his job, was a commercial success. Critics were lukewarm but the film was an important one as it established Keaton as a leading man. Beetlejuice (1999) was the film that Michael Keaton was widely known for prior to the Batman films. Beetlejuice, directed by Tim Burton, is a horror-comedy. The plotline involves a recently deceased yuppie couple and a grotesque ghost, the title character played by Keaton.  When Tim Burton cast Michael in the title role in Batman, there were howls of protest from fans of the comic character. Keaton proved his critics wrong, and his performance as Batman was solid. Batman (1988) and Batman Returns  (1992) were both well received by critics.

In 2002, Michael was nominated for a Golden Globe Award for his role in Live From Baghdad (2002), a Screen Guild Award nomination for The Company (2007) Michael won a Golden Globe for Best Actor in a Musical or Comedy for Birdman (2014). He also won the Critics Choice Award for Best Actor as well as Best Actor in a Comedy. He was nominated for the Screen Actors Guild Award, the Academy Award for Best Actor as well as the British Academy Film Award.? Both the Hollywood Film Festival and the Zurick Film Festival awarded Keaton a Career Achievement Award. In 2016.  France honored him with an Officers of Orders of Arts and Letters award. Keaton is a visiting scholar at Carnegie Mellon University.

Michael Keaton married Caroline Mcwilliams in 1982. Their son Sean Maxwell Douglas was born in 1983. Michael Keaton and Caroline Williams divorced in 1990.? Caroline McWilliams (1945-2010) was well known for playing Marcy Hill in the television series Benson. Michael later had a relationship with Courtney Cox from 1989 until 1995.

He is a Democrat and supported Obama. He also supported Bernie Sanders’s nomination in 2016.

Michael own a ranch in Big Timber Montana where he goes fly fishing.  He also owns a ranch in Santa Barbara, California and a house in Pacific Palisades.??

Michael Keaton was raised in the Roman Catholic faith.

Michael Keaton continues to make a wide variety of films. A number of his early films have retained a high rating on Rotten Tomatoes.

Michael is a fan of both the Pittsburgh Pirates and the Pittsburgh Steelers. He is known to schedule his work around some games. He is a keen fly-fisherman.