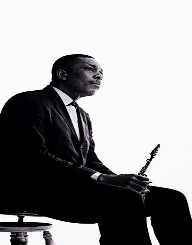 John Coltrane was an American jazz musician who played the saxophone.

John Coltrane was born on 23 September 1926 in Hamlet, North Carolina. His parents were John Coltrane and Alice Blair. When Coltrane was twelve his father, aunt, grandmother, and grandfather all died within a short space of time. He studied at William Penn High School in High Point, North Carolina. He moved to Philadelphia in 1943, and his mother bought him a saxophone. He began playing professionally in 1945, having played in a community band while in high school. Coltrane played cocktail bars and lounges as part of a trio. A guitarist and piano player would accompany him. To avoid the US army draft during World War II, Coltrane enlisted in the US Navy. He joined in August 945, just before Japan’s surrender.

Coltrane trained in New York before getting his posting in Pearl Harbour, Hawaii. In Hawaii, he played with the Melody Masters, a naval swing band. Coltrane could not join the band as it was an all-white band. Instead, he was credited as a guest performer. He was discharged from the US Navy in 1946 as a Seaman First Class. He returned to Philadelphia to pursue a career in music.

Philadelphia at the time was experiencing the bebop music craze. Coltrane came to play with a couple of established acts from his contacts in the navy. He toured with King Kolax and Jimmy Heath. Coltrane also began studying music and was taken under the wing by composer and guitarist, Dennis Sandole. In 1947, Coltrane switched from alto sax to tenor sax and joined the Eddie Vinson Band. A great variety of other musicians influenced Coltrane at this time, and the late 1940s were the formative years of his music. It is believed that composer Hassan Ibn Ali, had the greatest influence on the young Coltrane. Coltrane also played with his idol Charlie Parker during this time. It was seeing Parker play just before joining the Navy that most convinced Coltrane to become a musician.

Coltrane also became popularly known as ‘Trane’ during this period. Coltrane largely operated as a freelancer until 1955. Trumpeter Miles Davis contacted him, Davis had been a giant of the Jazz scene in the early 1940s, but his struggles with drug addiction had severely damaged his career. Davis wanted to join a quintet he was putting together. The band released some albums and was quite successful, but Coltrane developed a heroin addiction while with the band and it dissolved in 1956. Coltrane also worked with Thelonious Monk in 1957, but contract disputes limited the amount the pair could collaborate. Recordings of Monk and Coltrane were eventually combined into an album and released in 2005.

In 1958, Coltrane again teamed up with Miles Davis and his group. Milestones and Kind of Blue were both produced during this period of collaboration between Davis and Coltrane. 1959 saw Coltrane release Giant Steps, which featured only compositions he had created. Coltrane put together his quartet and began touring and recording with them; he also switched to soprano sax at this time. His first album with his group and on soprano sax was My Favourite Things, which was released in 1960.

Coltrane began to experiment wildly in 1961, and it greatly divided critics and audiences. While in Paris, Coltrane was booed for one performance, and he was seen as being against Jazz so experimental was his new sound. The criticism may have convinced Coltrane to adopt a more conservative style as his next two recordings were much less radical. Coltrane also began dedicating his music to God during the early 1960s, and his faith was the key inspiration to A Love Supreme. The late period in Coltrane’s career is seen as being avant-garde in style. It has been rumored that Coltrane experimented with LSD during this time and this, in turn, influenced his work.

John Coltrane married Juanita Grubbs, but known as Naima Coltrane, in 1955. Naima was a Muslim convert and had a young daughter, Antonia, whom Coltrane adopted. They lived together in Philadelphia and then later in New York. In 1963, Coltrane announced that he was leaving and moved out of the family home. He kept in touch with Naima and Antonia, but he divorced Naima in 1966. Coltrane married his second wife, Alice McLeod, in 1966. Together they had two sons, John Jr. and Ravi. Coltrane died of liver cancer on 17 July 1967.

John Coltrane was born and raised in the Christian tradition, but his whole life he was constantly searching for and studying spirituality. He became involved with the African Methodist Episcopal church and had a religious experience in 1957. Coltrane attributed his ability to overcome alcohol and heroin addiction to this religious experience. He dedicated much of his work to God after this. He continued to study other faiths and was very interested in Hinduism and the contrasts between Jesus and Krishna. He studied Islam and read the Kabbalah and never stopped his search to find meaning in life. Following his death, a church in California declared him an incarnation of God and began worshipping him. The African Orthodox Church eventually assimilated this church, and today Coltrane is recognized as a saint by the Church. St. John Coltrane iconography can be found in some African Orthodox churches in America.