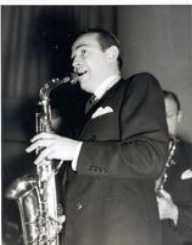 Jimmy Dorsey was born on February 29, 1904, in Shenandoah, Pennsylvania. His father was a coal miner and later became a music teacher and led a brass band. Dorsey and his two siblings all studied music with their father. As a teenager, Dorsey and his younger brother Tommy founded a band, Dorsey’s Novelty Six, which was later renamed to Dorsey’s Wild Canaries. The brothers worked in various bands and as freelance studio musicians during the 1920s.

Both brothers mainly performed in New York City, and Jimmy became known for his clarinet and alto saxophone playing. His brother Tommy played the trombone and trumpet. The two gained recognition very fast and played with many of the famous musicians from big bands and swing music, like the California Ramblers, the Paul Whiteman Orchestra and Ted Lewis. They also recorded with such artists as Bing Crosby, the Boswell Sisters, and Ruth Etting.

In 1927, Tommy and Jimmy established their label The Dorsey Brothers and Their Concert Orchestra and began recording under this label. They did not make a formal debut until 1934 when they became the residents at the Glen Island Casino in New Rochelle, New York. The Dorsey Brother Orchestra was known for their sweet-toned instrumental style, combined with the big band orchestral sound and popular appeal of dance music. They quickly became one of the most innovative bands of the Swing Era.

In 1935, the rivalry between two brothers led to the split of the band, with Jimmy remaining in the band, and Tommy forming a new one. The two separate orchestras of the Dorsey brothers became the most popular bands in America. Tommy eventually outsold his brother, especially in the craze of Swing Era, in 1938. Tommy became known as “That Sentimental Gentleman of Swing,” and his popularity increased even more after he hired Frank Sinatra in 1940.

Jimmy Dorsey was much more easygoing and gentle as a bandleader, in comparison with his brother. The Jimmy Dorsey Orchestra played for several motion picture soundtracks and radio broadcasts. Their most notable work was on Bing Crosby’s Kraft Music Hall. During the 1940s, he hired Bob Eberly and Helen O’Connell and released singles like “Contrasts,” “Amapola,” “Green Eyes” and “Maria Elena.”

During the 1940s, the big bands began their demise, when the public began focusing on vocal performers. This led to a decline of Dorsey’s and his brother's fame. Their groups disbanded, but both later formed their orchestras. In 1947, the two brothers worked briefly together on the film The Fabulous Dorseys. They were again reunited in 1953 for Tommy Dorsey Orchestra Featuring Jimmy Dorsey. The two gained a good deal and began performing on The Jackie Gleason Show. Dorsey’s witnessed the beginning of a new musical era when they introduced young Elvis Presley. From 1955 until 1956, they hosted their show Stage Show on CBS.

Jimmy Dorsey was married to Miss Detroit of 1925, Jane Porter. They met in 1924. Dorsey’s had one daughter, Julie Lou. Their marriage was divorced in 1949. Dorsey had a brief affair with his brother’s second wife Patricia Dane before she met his brother.

His brother Tommy died suddenly in November 1956, and Jimmy took over the band. However, not long after his brother’s death, Dorsey died of throat cancer, is only 53 years old at the time. Just shortly before his death, he was awarded a gold record for his single “So Rare,” which became his most famous single of all time. For his contribution to music and film industry, Dorsey was awarded a star on Hollywood Walk of Fame.