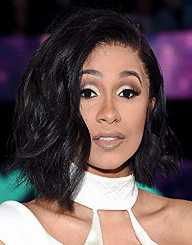 Belcalis Almanzar was born on October 11, 1992. She is an American singer and actor. She is also a famous social media personality. She is a former stripper who worked as a dancer and stripper in clubs after she dropped out of college. She is also known as Cardi B. She has more than 5.2 million followers on her first Instagram account. Her second Instagram account has more than five hundred thousand followers.

Belcalis Almanzar looks forward to having a successful career to be able to support her family. She loves posting satirical and comic videos on her Instagram accounts. She got her first big break on television when she starred in the reality Television show ‘Love and Hip Hop: New York.’ She is also a comedian in her unique way.

Belcalis Almanzar was born on October 11, 1998, in Bronx, New York. She was born to a Trini mother and a Dominican father. She has a sister by the name Hennessey. Most of her childhood was spent travelling between the Bronx and Washington Heights. After she graduated high school, she enrolled at Borough of Manhattan Community College. She took up French and History courses. While she was a student at the college, she took part-time jobs to sustain herself and her family.

Belcalis Almanzar worked as a marketing expert at the Amish market. She later went on to pursue a career in the field of marketing. She dropped out of school when she could no longer juggle work and school. She started working as a stripper and dancer at New York Dolls. She became popular among dealers, druggies and regular people who went to the bar to drink.

Belcalis Almanzar became a stripper and dancer at the age of eighteen. She promised herself that she would pursue that path until she reached twenty five years of age. But at the age of twenty three, she quit stripping when she started becoming famous via social media. She stopped stripping so that she can send out a message to the general public against adultery and domestic violence. She is a strong, independent and socially responsible person. She drew the attention of celebrities such as Lee Daniels, Patricia Fields, Ebro and Charlagmagne the God when she became an entertainer.

In 2015, Belcalis Almanzar participated in the New York Fashion Week. She went ahead to appear in Farruko’s music video titled ‘ChapiChapi’ where she featured with Messiah. After she became popular, she was invited to co-host ‘Uncommon Sense’ with the famous radio presenter Charlamagne the God. The audience got a glimpse of her personal life on Revolt TV. She also launched her DVD titled ‘I Am: Cardi B.’ She continues to prosper in her career as she is not giving up anytime soon.

What makes Cardi B special?

Belcalis Almanzar is strong and has an intriguing personality. Her fans include celebrities such as Drake, Lee Daniels, and Nelly. She is a famous social media personality who has so many followers on her Instagram account. Her mottos are ‘Do not apologise for what you are’ and ‘Just Be Yourself.’ She boldly talks about her life as a former stripper, sex, money, and power. She enjoys top position in modern America’s cultural landscape. She is much concerned about her future and her family. She is optimistic about having a successful career in the music and acting industry.

Cardi B. loves her family so much and is working so hard to be able to sustain them. She has a net worth of $650, 000. She has an honest, straightforward nature and funny personality that many people love about her. She states that after setting up her career in music and acting, she looks forward to a calm and quiet family life with the people she loves most, and that is her family. She is a role model to the youths who want to achieve it in life using their God given talents.