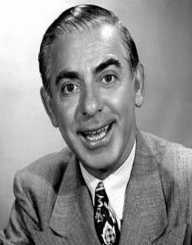 Eddie Cantor was an American radio, stage, and film actor, dancer, singer, and songwriter. Born on January 31, 1982, he was one of the topmost performers in the early 20th century.

Eddie started his career on stage in his teen years before venturing into Broadway and films. He appeared in numerous Broadway productions including the musicals Kid Boots and Whoopee!. Cantor gained fame with the NBC Radio show The Chase and Sanborn Hour. He also had radio shows like Time to Smile and Pabst Blue Ribbon. Cantor served as the second president of the Screen Actors Guild from 1933 to 1935.

Eddie Cantor was born Edward Israel Itzkowitz on January 31, 1982, in New York City to Meta and MechelItzkowitz who were Russian-Jewish immigrants. At the age of one, his mother died during childbirth, and a year on, his father also died of pneumonia.

Eddie Cantor gained interest in the entertainment industry at a very young age and won contests at local theatres. He since started appearing on stage, worked as a waitress and performed for tips at Carey Walsh’s Coney Island Saloon.

In 1917, he made a debut public appearance in Vaudeville at the Clinton Music Hall in New York. His tour with AI Lee as “Cantor and Lee,” gained him attention in Broadway.

Eddie Cantor made a Broadway debut in the Ziegfeld Follies of 1917 and continued featuring in it until 1927. He mostly co-starred with comedian Bert Williams and others like W.C. Fields, Marilyn Miller, Will Rogers, and Fanny Brice. Cantor gained fame with his act in musicals like Kid Boots, 1923, Whoopee!, 1928, Banjo Eyes, 1941 and Nellie Bly in 1946.

Radio Career “Chase and Sanborn” and Others

Eddie Cantor started a radio career in 1922, appearing on different shows. On February 5, 1931, he performed with Rudy Vallee on The Fleischmann’s Yeast Hour. This led to him earning a four-week try-out with NBC’s The Chase and Sanborn Hour. On September 13, 1931, he officially joined Chase and Sanborn as a replacer of Maurice Chevalier.

The one-hour show on Sunday was alongside Jimmy Wallington as an announcer and Dave Freedman on Violin. The Chase and Sanborn cemented Eddie Cantor's credentials as one of the leading comedians of his time. Cantor also started another radio show, Time to Smile on NBC running from 1940 to 1946 and followed it with Pabst Blue Ribbon Show from 1946 through 1949.

Aside from a prosperous radio and stage career, Eddie Cantor also played several film and television roles. He started appearing in short films where he performed comedy routines and his Follies songs.

He featured in the film version of Whoopee!, 1930 followed by Palmy Day in 1931. He since starred in several other films including Roman Scandals, 1933, Ali Baba Goes to Town, 1937, Forty Little Mothers, 1940, and Thank Your Lucky Stars in 1943. Cantor starred and produced the film Show Business, 1944 and that same year featured in American Creed. He also appeared in works including If You Knew Susie, 1948, The Story of Will Rogers, 1952 and made a cameo appearance in The Eddie Cantor Story.

Eddie Cantor married Ida Tobias in 1914 after first meeting a year before. The couple had five daughters Janet, Marilyn, Edna, Natalie, and Marjorie. Cantor died on October 10, 1964, at age 72 of a heart attack. He was buried in Hillside Memorial Park Cemetery in Culver City, California.