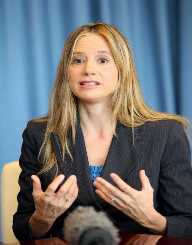 Mira Sorvino was christened Mira Katherine Sorvino at birth by her parents who were immigrants of Italian descent. She was born on the 28th day of September 1967. Her mother was also an actress who became a drama therapist while her father was also an actor. Early in life, Mira Sorvino's dad was not keen on her becoming an actress because of the incidence of child stars losing their innocence to stardom. She had two other siblings who also got steered off the path of acting. However, Mira made up for the gap by appearing in series of school productions. This was how Mira gave vent to her acting skills, and this was just enough to keep the flame of her skills burning.

The Dwight Englewood High School in the New Jersey city of Englewood was the school she attended. After high school, Mira went off to Harvard and majored in the Chinese Language. While in school, she was on the set of a stage play, Man of La Mancha, which was performed at the Loeb Experimental Theatre. This was in 1986, and Peter Sagal directed it.

Mira Sorvino attended Harvard, majoring in Chinese, graduating with such high distinction in 1989. Her thesis was on “Racial Conflict in China,” and this led her to stay an entire year in Beijing. Apart from becoming fluent in Mandarin Chinese, she also won the Hoopes Prize for her scholarly work.

Not many can recall that Mira Sorvino was on the set of 1985 film, The Stuff. She has cast accidentally on the set and given a small role.Mira was one of the fill-ins on the scene of the plant attacks.
Mira Sorvino's father had a role in the movie and while on set, Mira visited him, and that was how she got a cast for the role.

After her graduation, Mira Sorvino still had the slant to act, and that was how she ended up in New York. She had to work as a waiter before she got her roles. She also worked as a production assistant part of picking up small acting roles.

Her job at Tribeca Production Company, owned by Robert De Niro was an excellent start to push her forward to the big screen.

Mira Sorvino starred in the movie, Amongst Friends in the year 1993 and this was a gangster-themed film. It was an engagement that she devoted her time to and eventually got credited as an associate producer. She also played the lead female role in the movie.

Although the movie was an Independent one, it eventually got a respectable reception from the movie world. This gave Mira a lift as she was signed on for another Indie movie, Barcelona in 1994.
The second signup Mira got after then was Quiz Show, which came along too in 1994. She wowed the audience with she skillful showing, and more people began to pay attention to her.

Mira Sorvino boasts of an excellent poise and physique in addition to her remarkable intellect. She was the pick for Woody Allen’s hooker role in the 1995 film, “The Mighty Aphrodite.” This was what gave her the platform to hug the limelight and eventually, Mira won an Oscar at the age of 29 as the Best Supporting Actress in the same year.

Mira Sorvino went further to have her arrival as an A-lister cemented in the 1997 film, Romy and Michele's High School Reunion.

Mira was cast alongside the amazing Lisa Kudrow, and the beach scenes were silly and absurd but yet hilarious.

Mira Sorvino got prepared for stardom after she made a meal of the role she was offered in the 1993 film, Amongst Friends. Moving forward, she was cast in diverse roles, and she never shied away from taking on an unusual role.
The show Mira put up as a streetwalker in The Mighty Aphrodite by Wooden Allen was one that movie buffs cannot forget in a hurry. She was fresh and new to the screen, but she delighted and wowed the audience with such audacious display. This was no doubt her breakthrough moment.

Mira Sorvino was recognized as the 108th actress to get the Academy Awards when she clinched the Best Supporting Actress Oscar in 1995 for Mighty Aphrodite. This was on the 25th March of the year 1996.
Mira is a multi-linguist as she is adept in Mandarin Chinese and speaks French fluently. She is now a UN goodwill ambassador, and she was so decorated so that she can lend her voice to combat the ills of human trafficking.

In the year 2004, Mira Sorvino married a fellow actor, Christopher Backus. Their union produced two daughters and two boys. Mira had her first child at the age of 37 and the last at age 44.

She gave birth to the eldest girl named Mattea on the 3rd November 2004 while the second child came along on May 29th, 2006 and is called Johnny, The other two were born on 22nd June 2009 and 3rd May 2012 respectively. They are Paul Terry and Lucia.