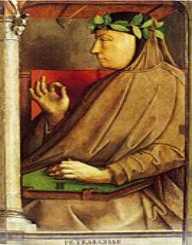 Francesco Petrarca was born on July 20th, 1304. He was an Italian poet and a philosopher who received high acclaim for his recognition as the “Father of Humanism.” He also gained popular out of his links to early manuscripts. Rumor has it that after Petrarch discovered the Cicero’s letters, this had a profound influence on initiating the Italian Renaissance. His famous works as a poet include the odes to Laura. Petrarch passed away on July 19th, 1374.

Francesco Petrarca was born on July 20th, in 1304. His birthplace was in Arezzo, Tuscany- which is now known as Italy. He was the son of Ser Petracco and Eletta Canigiani. While still young, Petrarch together with his family moved to France. To his father’s delight, he studied law in France regardless of the fact that his passion was in literature. Tragedy struck and his father, Ser Petracco passed away in 1326. It is at this point that Petrarch opted to follow his heart and study ancient literature instead of law.

Francesco Petrarca interest in the ancient literature was boosted by the fact that he later became a religious leader. With such a post, he had the opportunity of traveling around and collecting ancient texts. He spent years collecting numerous texts after which he passed them to Venice. In exchange, he was offered a home to reside in a while escaping the deadly plague. As Petrarch gained a deeper insight into the ancient period, he had great admiration for this era as he compared it to the challenges he was going through during his time. From this, he developed a deep belief that humanity could achieve that which the ancient people managed to achieve. This doctrine would later be adopted and given the term “Humanism.”

Apart from his passion for collecting ancient texts and learning more about the ancient times, Francesco Petrarca was passionate about writing. His creativity contributed to the award that he gained in 1341 for being the Rome’s greatest poet. Africa was among the best works that Petrarch considered as very important. He majorly used his vernacular language to compose poems that people could easily understand. This was one of the reasons why they got famous. One of these poems was “Laura.” This poem talked about the love for a woman named “Laura” that Petrarch had fallen head over heels for a while serving as a priest.

It could be said that Francesco Petrarca died in the line of duty as he passed away reading a certain Roman manuscript. He died on July 19th, 1374 at the age of 69.