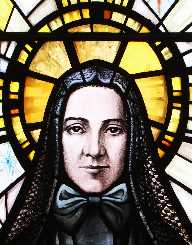 St. Frances Xavier Cabrini is an Italian-American nun who was originally from Lombardy, Italy and is the patron saint of immigrants. Her feast day is celebrated on December 22 but her memorial day is held on November 13 in the United States. Cabrini holds the title of the first naturalized US citizen to be canonized by the Catholic Church.

Born in Sant'Angelo Lodigiano, Lombardy, Italy on July 15, 1850, as Maria Francesca Cabrini, she is the youngest of 13 children to parents Stella Oldini and Agostino Cabrini. Both of her parents were cherry tree farmers who were well-off, but sadly, only 4 of their children survived well into adolescence, including her. Her mother gave birth to her two months premature, and therefore had a very delicate condition; weak and in poor health which she carried on throughout her life.

Even as a child, she always had an affinity and dedication for the Divine Works and dedicated herself to religious life. In 1863, she was enrolled at a convent school administered by the Daughters of the Sacred Heart at the age of 13. 5 years later in 1868, she graduated from said Institution not only with exemplary honors but with a teaching certificate as well. Upon her parents' death in 1870, she immediately applied in Arluno at a religious congregation ran by the Daughters of the Sacred Heart but her admission was denied for the reason of her poor health condition.

Undeterred from the rejection, Maria Francesca Cabrini, served in a local orphanage in Codogno as its headmistress called House of Providence. At the orphanage, she established a small community of women and encouraged them to live religious ways while also teaching at the side. Cabrini finally took her religious vows in 1877 at the age of 27. She adopted the name Xavier to her name based on the patron saint of missionary service, St. Francis Xavier, the Jesuit saint.


Foundation of the Missionary Sisters of the Sacred Heart of Jesus

With her growing number of charitable deeds, Maria Francesca Cabrini, first came into the light of Pope Leo XIII and then-Bishop of Piacenza, Giovanni Scalabrini when she established the Missionary Sisters of the Sacred Heart of Jesus (MSC) along with six other others. Cabrini wrote the implementing rules and regulation of the Institution and also served as the Mother Superior until her death.

At the MSC, they adopted orphans and established a day school wherein they taught needlework and embroidery. The products made from their embroidery are, in turn, sold as a small means of capital. After five years of establishment, they managed to build seven homes and a free school which caught the attention of Bishop Scalabrini.

A Mission Bound to the West: Extending Help to New York

Always the one willing to extend a helping hand, Maria Francesca Cabrini, approached the Pope back in September 1877 appealing for the green light to establish missions in China. The pope, however, instructed her to shift her vision to the West; assist her Italian countrymen who are relocating to America due to poverty issues back home.

Heeding the pope's advice, Cabrini packed her bags and left for New York in March 1889 with six other nuns and settled in New York City in housing provided by Archbishop Michael Corrigan. While in New York, she established an orphanage with blessings from the archbishop known as Saint Cabrini Home located in West Park. Besides assisting and providing for the Italian immigrants, she also offered catechism and teaching classes for the orphans. In the duration of her stay in New York, she managed to establish 67 institutions and even extended to Europe and South America.

Maria Francesca Cabrini spent the later years of her life in America and in turn made her a naturalized citizen of the United States come 1909. She died at the age of 67 on December 22, 1917, due to complications from dysentery. Initially, her body was interred in West Park, New York, but it was exhumed in 1931 as part of the canonization process.

For her to be beatified and canonized, two miracles performed were required by the process. Her first miracle was the restoration of sight of a year old baby named Peter Smith who was blinded by a silver nitrate solution. Her second miracle for her canonization was the healing of a congregation member who was suffering from a terminal illness. She was beatified by Pope Pius XI on November 13, 1938, and consequently canonized eight years later by Pope Pius XII on July 7, 1946.