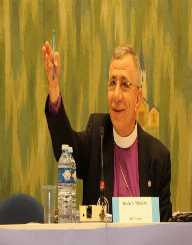 Munib Younan was born on September 18th, 1950. Since 1998, he has been spiritually serving as the Evangelical Lutheran Church in Jordan and the Holy Land’s Bishop (ELCJH). Since 2010, he has also served as the president of Lutheran World Federation.

Munib Younan was born on September 18th in 1950. His birthplace was in Jerusalem. Both of his parents were of Palestinian descent. They had fled Israel at a time when it was obtaining its statehoods in 1948.

Munib Younan pursued his theology and deaconry studies in Finland. Initially, he enrolled Luther Opisto where he took his deaconry lessons before later proceeding to Helsinki University for theology. Years later, he obtained his Master of Arts degree in 1976. This was not the end of spiritual education for him as he proceeded to Lutheran School of Theology at Chicago where he continued with his theology classes. This occurred in 1988.

In 1976, while at the Church of the Redeemer situated in Jerusalem, Younan was ordained as a pastor. He went on to spread the gospel in Jerusalem, Ramallah, and Beit Jala. Later in 1981, he joined Lutheran World Federation where he was initially appointed as a member of the youth team. He served in this position for three years ending in 1984. A year later, he became a member of Middle East Council of Churches. He went on to offer his services to the Fellowship of the Middle East Evangelical Churches – FMEEC as its acting president. He served this post from 2004 to 2010. He is to be remembered during his tenure as the president for voting without opposition that women should also be ordained as pastors.

On July 24th, 2010, Younan was appointed as the president of Lutheran World Federation – LWF. This is a body representing about 145 churches throughout 79 countries globally.

Aside from his spiritual blessings and a holy career, Younan is also a writer. In 2003, he successfully published his book titled Witnessing for Peace: In Jerusalem and the World.

In 1980, Munib Younan wedded Suad Yacoub. The two are proud parents of three children. The two are blessed to live long enough to see their one grandchild.