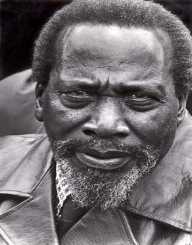 Kamau wa Ngengi was born c. 1891, in Gatundu, British East Africa. His parents lived on the river banks and had a farm. They grew crops and bred goats and sheep.

In 1909, he enrolled at the Church of Scotland Mission boarding school. He learned English and did odd jobs for the mission.

He completed a carpentry apprenticeship, but the mission wouldn't recommend him for work.

In 1914, Kenyatta moved to Thika. He found work with an engineering company, but he had to leave when he became very ill. The British Empire tried to recruit many of the Kikuyu people during this period while they were at war.

Kenyatta moved to live with the Maasai. His aunt married a Maasai chief, and Kenyatta took refuge with them. He changed his name to ‘Kenyatta' during this period.

After relocating regularly over the next five years, in 1922, he moved back to Nairobi. He became a stores clerk with a very high wage, and it gave him financial security and independence.

Kenyatta developed an interest in politics through a friend. Before long, he became secretary of the Kikuyu Central Association (KCS).

Over the next two years, Kenyatta traveled throughout Kenya starting new branches of the KCS. He also represented them at several government forums.

The KCA sent him to London in 1929, and he stayed there for two years. He also traveled to Germany and Moscow during this time.

Kenyatta returned to Kenya, but in 1931, he traveled back to Europe.

After studying in Moscow for a year, Kenyatta went back to London in 1933. He joined the editorial board of the Negro Worker newspaper. Due to this, over the next four years, he wrote several articles for the paper.

Kenyatta settled in London, and he remained there until 1946. He worked and studied during this time.

He became more politically active, and he started speaking out against British colonialism. Kenyatta spoke to several fringe groups. During the Second World War, Kenyatta moved to Sussex from 1939 to 1945.

In 1940, due to the war, the KCA was banned by the Kenyan authorities. MI5 monitored Kenyatta, as they had been for some time.

In 1944, the Kenya African Union (KAU) established itself. It was a political party for indigenous Africans. In June 1947, Kenyatta became President of the KAU.

Over the next few years, Kenyatta worked hard to unite the different tribes. By 1952, the population recognized him as a national leader of Kenya.

The authorities arrested Kenyatta in 1952. The white minority government wanted him silenced. The charges were false and the trial a joke, but in 1953, Kenyatta and his colleagues were found guilty.

The sentence was seven years of hard labor. They won their appeal with the Supreme Court and went free. After being arrested again straight away, their case was taken to another court by the government.

With the appeal overturned, the men went to prison. As a result, Kenyatta became a martyr to his people. After his release in April 1959, Kenyatta lived under strict detention rules.

Several countries called for his release from detention, with the British blamed.

The British Empire began to prepare for Kenya to become an independent country. It was evident to everybody that Kenyatta would be involved in Kenyan politics.

Kenyatta traveled continually after his release from detention in 1961. This was to build awareness of himself as the potential leader of Kenya

In 1963, the general election gave Kenyatta's KANU party 83 seats out of 124. On 1st June, Kenyatta became Prime Minister of Kenya.

In December 1964, Kenya became a republic. During his years as President, Kenyatta made many changes to Kenya.

He worked on economic growth, the education system, and making healthcare services better.

The government developed widespread corruption during Kenyatta's rule, and he was one of the worst offenders.

In the 1969 elections, only KANU representatives ran for seats, which meant Kenyatta remained in power.

His health declined over the years, and he died on 22nd August 1978 from a heart attack. Kenyatta was known as the Father of the Nation.