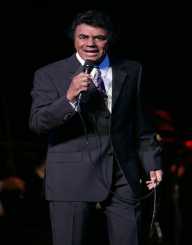 Johnny Mathis is an award-winning American singer who became very famous with popular music. Born on September 30, 1935, Johnny Mathis started his music career performing in clubs until he signed to Columbia Records and subsequent release of first LP album in 1956. Since that time, he has never looked backed and has several albums to his credit including Good Night Dear God, Open Fire, Two Guitars, The Rhythm, and Blues of Broadway among several others. Johnny Mathis had great success with most of his albums achieving gold or platinum status. Three of his works have been inducted into theGrammy Hall of Fame.

Johnny Mathis was born on September 30, 1935, in Gilmer, Texas to Clem Mathis and Mildred Boyd. He was the fourth child of seven. He was raised in San Francisco, California. Growing up his father identified his music talent and bought him an old upright piano at the cost of $5 to practice with it.  Mathis took his talent to church and school by singing there. In exchange for voice training, hehad to work around his trainer Connie Cox’s house at age 13. He learned vocal scales, operatic singing,and exercises, classical, voice production, in his six-year studies under Cox. He attended George Washington High School in San Francisco where he played basketball and a high jumper and hurdle athlete. With an athletic scholarship, he enrolled at San Francisco State College in 1954.

At college, Johnny Mathis wanted to become an English and physical education teacher. During a performance Black Hawk Club, he gained the attention co-founder of the club Helen Noga who later became his manager. Noga was able to secure him a deal at Columbia Records after a meeting with George Avakian, the record label’s head of Popular Music A&R. in 1956, Mathis was to choose between going for a trial to join the U.S. Olympic Team as a high jumper or stay for his first recording.

Mathis opted for the latter on his father’s advice and later that year; his debut record album, “Johnny Mathis: A New Sound in Popular Song.” The album did not do well as expected and had to perform at nightclubs in New York. With the help of Columbia Records’ vice president and record producer Mitch Miller, Mathis discovered his real sound in soft, romantic ballads. He was therefore good to go with a second album “Wonderful Wonderful” that had the hit songs Wonderful! Wonderful!! and It’s Not For Me To Say. Mathis performed the latter in the Movie Lizzie, I957.

In 1958, he left San Francisco to Beverly Hill, California with the Nogas family. The Nogas had sold their entire stack in the Black Hawk club. The year came with a big bang as Mathis released the album Johnny’s Greatest Hits. The album made a record by staying on the Billboard pop album chart for490 consecutive weeks. Johnny Mathis parted ways with Noga in October 1964 for a new manager Ray Haughn. On May 11, 1967, he formed the Jon Mat Records Inc. to handle his recordings. In 1978, he worked with singer Deniece Williams to release Too Much, Too Little, Too Late. The song charted number one on the U.S. Billboard Hot 100 pop chart and attained a gold and silver certification in the U.S. and UK respectively.

Mathis had 200 singles with most of them charting across the globe and had five albums chatting on the billboard simultaneously.

Johnny Mathis has never been married and has admitted being a gay. The first time his sexual orientation came out was in an article by US Magazine in 1982. The magazine stated him as saying"Homosexuality is a way of life that I've grown accustomed to." Even though the article was later retracted, Mathis in an interview with CBS News Sunday Morning on May 14, 2017, confirmed he is a gay. He said, "I come from San Francisco. It's not unusual to be gay in San Francisco. I've had some girlfriends, some boyfriends, just like most people. But I never got married, for instance. I knew that I was gay." Mathis is still a sports enthusiast and plays golf. He organizes the Johnny Mathis Golf Tournaments in the US and the United Kingdom and other sporting activities like Johnny Mathis Invitational Track & Field Meet and a golf tournament in Belfast.

Johnny Mathis received a Lifetime Achievement Award from the Academy of Recording Arts and Science in 2003. He has been inducted into the Grammy Hall of Fame for three records being Chances Are, 1998, Misty, 2002 and It’s Not for Me to Say in 2008. Mathis was inducted into the Great American Songbook Hall Of Fame on June 21, 2014. He has an honorary Doctor of Fine Arts degree from the San Francisco State University.

Started his music career performing in clubs until he signed to Columbia Records and subsequent release of first LP album in 1956. Since that time, he has never looked backed and has several albums to his credit including Good Night Dear God, Open Fire, Two Guitars, The Rhythm, and Blues of Broadway among several others. Mathis had great success with most of his albums achieving gold or platinum status. Three of his works have been inducted into theGrammy Hall of Fame.