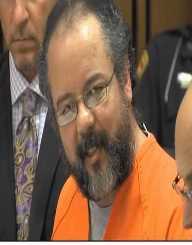 Criminal Ariel Castro was born on the 10 July 1960 in Puerto Rico. When he was a child, his family moved to Cleveland Ohio.

He worked as a school bus driver and lived with his wife and four children at 2207 Seymour Avenue, Cleveland, Ohio. In 1996, because of domestic violence issues, Ariel Castro's wife left him and gained custody of their children. On the 23 August 2002, he lured a friend of one of his daughters, Michelle Knight (21)  into his house where he proceeded to rape her. He then kept her captive and subjected her to abuse, torture and rape. His second victim was Amanda Berry ( 16).

Castro offered the teenager a lift home from her job at a fast-food outlet, and as she knew his children, she felt safe accepting a lift with him. He then proceeded to kidnap, rape and hold her captive along with Michelle Knight. In 2004 he claimed a third victim when he approached a friend of his daughter, Diana DeJesus (14), and repeated his crime.

During the time he held the young women captive, Castro lived a life of apparent normality. Family and friends would visit, and he continued with his job as a school bus driver. The women’s ordeal ended when Berry managed to escape and alert authorities to his crimes.

Ariel Castro pleaded guilty to kidnapping the three women as well as the assault and rape which took place between 2002 and 2004. He was sentenced to life without parole, and after thirty days in jail, he committed suicide in his cell.