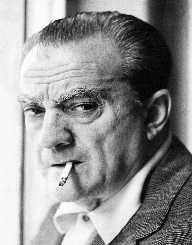 Due to the privileges bestowed to his family, he was educated in the best private schools in Milan. He also studied music and arts from some of the greatest composers in Italy then.

He was also an avid horse breeder from an early age. Like all male members of European aristocratic families, Visconti served for two years in the military. He resumed his ventures in theater in 1928. That same year, he joined La Scala. At the theater production La Scala, he assumed the role of scene set designer. His stint at the theater was cut short with his decision to move to France.

At the age of 29, Luchino Visconti debuted in his career with a role as an assistant film director under Jean Renoir. His first films were Toni, and Campaign Party. These were released in 1935 and 1936 respectively. He assisted Renoir again in 1941 in the production of the film La Tosca. Visconti got his first hand as director in 1943. His film Obsession was widely criticized by the clergy.

His movie career was briefly interrupted by the WW2. Soon after the war was over, Visconti produced The Earth Trembles in 1948. He continued with his production in the 1950s and 1960s to the 1970s. His style of realism gave him a wide acclamation from the public. His sense of touch with the reality of social culture and politics of the day gave his films a unique aura. The documentary film the Earth Trembles is a typical example. This film was done without a cast. Everything was cast at the scene. The end product was the original daily lives of fishermen going on their business as usual.

The subsequent years followed him with other productions. In 1951, Luchino Visconti produced The Most Beautiful. Two years on, he wrote and directed We the Women. In 1960, he produced Rocco and His Brothers. Perhaps the most acclaimed film was The Leopard in 1963

Despite having made fame in the film industry, Luchino Visconti remained loyal to his theater roots. In his theater productions, he blended Italian plays with other exotic writers from all over Western Europe and the US. He also had several opera productions in Italy. Visconti was a tough director. He got what he wanted despite the cost. In many instances, he fell out with some actors due to his ruthless character. Even so, the actors liked him for his originality, liberal trends and resolve to win.

Luchino Visconti was openly gay. His relationships often geared around the handsome men in his productions. At the time of his death, he was involved with his partner Helmut Berger. Berger was an Austrian actor who featured in several Visconti directed films.

Though he was brought up in a fascist environment, he later embraced communism. During the WW2, he harbored the Italian communist party officials at his palatial mansion in Milan. After the downfall of the fascist Mussolini, the Communist Party recognized Visconti in numerous counts. Even with that, he still had critics who never thought he had fully embraced communism.

He was also a heavy chain cigarette smoker. He used to smoke an average of 120 joints daily. The smoking affected his health and slowed down his public life.

Luchino Visconti suffered two strokes before his demise on March 17, 1976, in Rome. He was 76 years. With the aristocratic and bisexual tags, Visconti still managed to have a successful film career without much disruption. His ability to ruthlessly follow through what he wanted led him to be one of the pioneers of bringing European theater to Italy. He used his nobility connections to advance art and theater in Italy.

In his life, he was awarded two prestigious honors. He got the Palme d’Or in 1963 and the Golden Lion in 1965, both in his native Italy. He also has a museum in Ischia named after him.