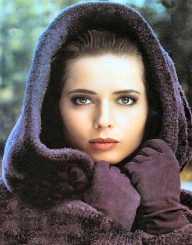 As a young adult, Isabella Rossellini moved to the United States. While there, she attended Finch College before later attending the New School for Social Research.

Rossellini’s acting career began to pick up in the mid-1980’s. Before this, she had been more focused on modeling, but she now had more time for acting. Most of her roles were still small. Some of the films she appeared in included  Siesta, Red Riding Hood, and Cousins.

The early 1990’s were filled with more small roles in movies, as well as roles in television shows and made-for-television films. Some of her early work from this decade include Gallant Ladies; Death Becomes Her, Fallen Angels, and Wyatt Earp. As the 1990’s continued, Isabella Rossellini took on larger roles in films, and she continued to act in made-for-television movies and guest roles on television shows. Some of these works included Big Night, Chicago Hope, Left Luggage, and The Simpsons.

In the early 2000’s, Isabella Rossellini stepped away from working on made-for-television films and focused more on television shows and films. She even had a recurring role as Josephine de Beauharnais in Napoleon in 2002. Some of the other works she did during the early 2000’s include Empire, The Saddest Music in the World, Thar, Alias, The Architect, and Infamous. As the decade continued, she resumed working in televisions shows and made-for-television movies. Some of these included Infected, My Dog Tulip, The Phantom, and Two Lovers.

In the 2010’s, Isabella Rossellini worked on several types of projects, including parts in films and television, as well as guest parts and recurring roles in television shows. Some of her most recent works include Late Bloomers, Mammas, Enemy, The Blacklist, and Shut Eye. As of 2017, Isabella Rossellini has several works in projects, which are predicted to come out in upcoming years.

In the 1980’s, Isabella Rossellini took a break from acting so she could focus on acting. One of her biggest modeling projects began in 1982 when she started working with Lancome Cosmetics. She continued to work with this company until 1996. In the meantime, she also modeled for several magazines, including Elle and Vanity Fair.

Isabella Rossellini has also written several books, many of which are autobiographical. Some of her most famous books are listed below.

Over the years, Isabella Rossellini has earned several awards for her acting career. Some of her most impressive awards are listed below.

Isabella Rossellini was first married to Martin Scorsese in 1979. However, the couple divorced only a few years later in 1982. She then married Jon Wiedemann only a year later. This couple had one daughter together: Elettra. This couple also soon divorced, in 1986. Outside of her marriages, she also has another son, Roberto.