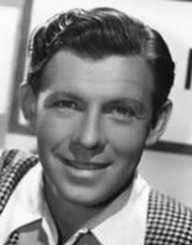 George Lloyd Murphy was an American actor, dancer, and politician. Born on July 4, 1902, he was best known as a song-and-dance man is numerous Hollywood musicals from the 1930s to the 1950s. From 1944 to 1966, he served as the president of the Screen Actors Guild. As a politician, Murphy was elected as US Senator from California, becoming the first US actor to be elected into public office in California. He served in office from 1965 to 1971.

George Lloyd Murphy was born on July 4, 1902, in New Haven, Connecticut. His father Michael Charles “Mike” Murphy was an athletic trainer and coach. Murphy received education from Trinity-Pawling and continued at Peddie School before enrolling at Yale University. He dropped out of the university, working on several jobs including with Ford Motor Company as a toolmaker. He also worked as a  real estate agent, miner and became a nightclub dancer.

George Murphy went into acting becoming famous as a song-and-dance man. In 1927, he made his first Broadway appearance as a member of the chorus in God News. He also made appearances in Broadway shows like Roberta, Hold Everything! And Of Thee, I Sing. These appearances pushed him into Hollywood, making a debut in the film Kid Millions in 1934. In 1938, he appeared alongside Shirley Temple in Little Miss Broadway and with Judy Garland in Little Nellie Kelly in 1940.

He also appeared in big-budget musicals like Broadway Melody of 1938, Broadway Melody of 1940 with Fred Astaire and For Me and My Gal. His films include Hold That Co-ed, 1938, and Bataan, in 1943. In 1944, he was elected the president of the Screen Actors Guild serving until 1946. He also held a position like the president of Delius Studios and the Technicolor Corporation. Murphy’s last work was Walk East in the Beacon.

George Murphy was a Democrat but switched political party to join the Republican Party in 1939. He since became a political ally of Ronald Reagan; both starred in This is the Army in 1943. In 1953, Murphy, having gained popularity in the film industry, decided to venture into politics. He joined the leadership of the California Republican Party in 1953. That same year, he directed the entertainment for Richard Nixon.

Murphy won elections to the US Senate as a representative from California in 1964. He had defeated former presidential press secretary Pierre Salinger, who served in John F. Kennedy. He took office on January 1, 1965, and served until 1971. He sought for re-election in the 1970 election but lost to John V. Tunney, son of heavyweight champion Gene Tunney.

On December 18, 1926, George Murphy married Juliette "Julie" Henkel-Johnson, his ballroom dance partner. The couple had two children, Melissa Elaine Murphy, and Dennis Michael Murphy. Julie died in 1973. In 1970, he published the autobiography, Say. . . Didn’t You Used to Be George Murphy? Murphy then married Bette Blandi in 1982. Murphy died on May 3, 1992, of Leukemia at Palm Beach Florida.