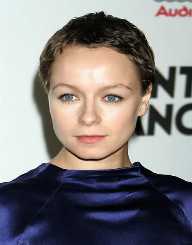 Samantha Morton is an established fine actress of her generation. She is a famous English actress, Director, screenwriter and film actress. The Oscar nominated actress starred in the famous Minority Report, Jesus's Son, Sweet and Lowdown and Fantastic Beasts and Where to Find Them.

Here is a mini-biography of the Academy Award-winning actress that will cover her childhood, education, career, personal life and much more. Welcome aboard as you get to know the multi-talented Samantha Morton better.

Samantha Morton was born on 13th May 1977 in Nottingham, England in the United Kingdom. She is the third child of Pamela Mallek and Peter Morton who divorced when she was three years old. Her parents took other spouses after divorce and made Samantha part of a mixed family.

Samantha lived with her father until she was eight. Her father Peter Morton was an alcoholic and her mother involved in a violent relationship in her second marriage. Thus neither of her parents could take care of her or her siblings. As a result, Samantha never lived with her parents again. She spent her next nine years in and out of forester care and children's home.

Samantha Morton attended West Bridgford Comprehensive School. A teacher at this school had seen the talent in the young star, and he had advised her that she should do drama. She started doing auditions for all the drama groups she had heard about, but unfortunately, she didn't get anywhere.

The same teacher told her about the Central Junior Television Workshop where she tried her luck, and she was accepted at the age of 13yrs.

Samantha Morton's career started at the age of 13 when she began training as an actress at the Central Junior Television Workshop. She started her career in 1991 in British Television. She started being given small screen roles as in the series of Lucy Gannon's Soldier Soldier as Clare Anderson.

Her television career continued as she appeared in peak practice and an episode of Cracker. Here she played as a young girl who becomes expectant by the head of a religious cult.

In 1995-96, she had a regular role in the British miniseries Band of Gold where she was acting as a prostitute.

In 1996-97, Samantha Morton's television roles continued, and she was featured in period dramas such as Emma and Jayne Eyre which were aired on ITV.

In the same year, she took a leading role in the independent drama Under the Skin. Here she played as a woman who was coping with the death of her mother. This movie garnered favorable reviews from writers who made her win the best actress award in 1998.

In 1999, Samantha Morton's career moved up several notches where she made about five films all which were successful. She was featured in Sweet and lowdown a romantic comedy by Woody Allen. She starred in the indie drama Jesus' son and her other romantic drama Dreaming of Joseph Lees.

In 2000, Samantha Morton appeared in a biographical drama known as Pandemonium and also provided the voice of Ruby for the Canadian animated series Max and Ruby.

In 2004 she took a supporting role in a drama known as Enduring love which won her the best-supporting award at the 2004 British Independent Film Awards.

River Queen was her first film in 2005 followed by The Libertine, and Lassie a family drama.

In 2006-2009, Samantha Morton continued to shine in her career and starred in films like Expired, Control, The golden age, and Mister Lonely.

Other films that Samantha Morton has produced or has been featured and was received well are;

In 2016, Morton appeared in a film adaptation Fantastic Beasts and Where to Find Them which was her most significant commercial success in her career. It grossed around the US $806 million.

Samantha's achievements are clear evidence that this British actress is successful and talented in what she does.

In 1998, she won the Best Actress Accolade at The Boston Society of Film Critics Award. She was also nominated for the BIFA Award for the Best Female Performance In a British Independent Film.

In 1999 she won the Evening Standard British Film Award for the Best actress.

She earned an Academy Award and Golden Globe for The Best Supporting Actress in her role in Sweet and Lowdown.

In 2002 she won the Saturn Award for the best-supporting-actress, Empire Award for the Best British Actress, Best Actress Award at the 5th British Independent Film Awards, and 7th Toronto Film Critics Association Awards.

In 2003, she got nominated in the Best Actress category in Academy Award, Independent Spirit Award, and Broadcast Film Critics Association Award.

In 2004, Samantha Morton earned a nomination for the Best supporting Award at the British Independent Film Awards.

In 2006, she received a nomination in the best-supporting award at the 59th Primetime Emmy Awards and 65TH Golden Globe Awards.

In 2010, Morton won A BAFTA TV award, and in 2013 she was awarded The Best Actress Golden Space Needle Award at the Seattle International Film Festival.

In 2014, she got nominated for the Best Actress Award at the 2014 BloodGuts UK Horror Awards.

Samantha Morton dated actor Charlie Creed-Miles The Last Yellow co-star in 1999-2000, and they were blessed with a daughter named Esme born on 5th February 2000.

She later dated filmmaker Harry Holm and they had a daughter Edie born on 4th January 2008. In 2012, they had a son known as Theodore. The family lives in Derbyshire, England.

On July 20, 2011, the Nottingham Trent University recognized her internationally successful acting career and awarded her with an Honorary Degree of Doctorate of Letters.