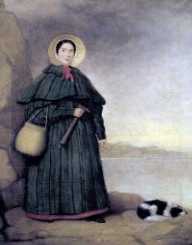 Agnes Arber was born 23rd February 1879, to Henry Robertson, and Agnes Lucy Turner. She was born in London and was the eldest of four children. She had a brother named Donald, and two sisters, Margaret, and Janet. Agnes Arber’s father was an artist. He taught Arber how to draw, which in later years would be an invaluable tool, as she was able to illustrate her books.

Agnes Arber was enrolled at the North London Collegiate School from the age of eight, and it was there that she first discovered her love of botany. Her first article was published in the school magazine in 1894. It was also at school that Agnes Arber met Ethel Sargant, who gave presentations to the science club on a regular basis. Sargant is named as being the largest influence on Arber, and would later become her mentor.

1897 saw Agnes Arber begin her study at University College in London, and she graduated with her Bachelor of Science in 1899. Agnes Arber was awarded a scholarship to Newnham College in Cambridge, and she completed a second degree in Natural Sciences, graduating in 1902.

Agnes Arber received her Doctorate of Science from University College in 1905.

In 1897, before starting at University, Agnes Arber worked with Sargant in her laboratory over the summer period. She learned valuable techniques on preparing plant specimens for examination under the microscope. Agnes Arber returned during her summer break while studying, for further work experience with Sargant.

Agnes Arber was employed by Sargant during 1902-1903, as a research assistant. She worked on seedling structures. In 1903 her first paper was published, Notes on the anatomy of Macrozamia heteromera.

Agnes Arber had several further papers published during her time at University College, specifically on the gymnosperm family of plants.

At that point in history, women were not allowed to attend laboratories for research. Newnham College had purchased a building, and Balfour Laboratory was founded, specifically for women to conduct their research. Agnes Arber was granted space in the laboratory in 1909 and worked there until 1927 when it closed.

Agnes Arber's research was prolific, and by 1920 she had published two books and over 90 papers.

In 1925, her third book was published. The assignment had originally been given to Sargant, but due to ill-health and old age, she suggested Arber take over the work.

Once Agnes Arber no longer had her workspace at Balfour Laboratory, she set up her own small laboratory workspace at home so she could continue her research.

For the 12 year period between 1930 and 1942, Agnes Arber continued her research, specifically the structure of flowers. The results of her studies were published in 10 papers during this period, including a summary of morphological ideas, which was to become a very important paper in morphological studies. Arber’s last paper on botanical research was published in 1942.

Agnes Arber closed her laboratory during the Second World War, as it was becoming increasingly difficult to get supplies. She decided to concentrate her work from a philosophical and historical point of view. In the early to mid-1940s, she published works on historical botanists, including Sir Joseph Banks.

She then went on to publish two works in relation to Goethe and Georg Christoph Tobler. She introduced their work and then gave her interpretation of them.

Agnes Arber published The Mind and the Eye: A Biologist’s Standpoint, in 1954. She had begun to look at the links between science and philosophy. In 1957 her final book was published. It was titled The Manifold and the One and delved even further into philosophy. It incorporated several mystical and philosophical traditions and discussed the mystical experience.

Agnes Arber’s first book was published in 1912. Titled, Herbals, their origin, and evolution, it was a culmination of research on all the herbals that had been written about from 1470 to 1670. It included plant descriptions, classifications, and identifications. The book was re-written and expanded in 1938 for a second edition to be published. A third edition was published in 1986. Even today, the work is still the standard work used when studying the history of herbals.

The book considered most important was published in 1950, and called, The Natural Philosophy of Plant Form. In this book, Arber discusses the philosophy of plant morphology.

1946:   First female botanist to be elected as a Fellow of the Royal Society

1948:   First female to receive the Gold Medal of the Linnean Society of London

Agnes Arber married Edward Alexander Newall Arber in 1909. The couple were reported to have a happy marriage and had one child, Muriel. Edward was a paleobotanist, and Muriel grew up to become a geologist.

Agnes Arber's research paved the way for botanists, particularly her volume on herbals, which is still considered the ‘go to’ guide for study in present times.