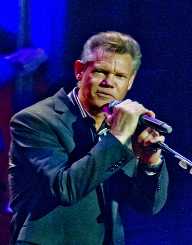 Randy Bruce Traywick, also known by his stage name Randy Travis, was born on May 4, 1959, in Marshville, North Carolina. His mother was a textile factory worker and his father, a horse breeder. From an early age, Travis’ father encouraged him and his brother to pursue a career in music, since they both showed talent. In 1967, Randy began to learn to play guitar and started to sing in the church of Christ.

Randy Traywick has his brother started to perform at local clubs and talent contests in 1969. Despite his father being supportive of music, Randy often fought with him. He dropped out of high school and got in trouble with the law enforcement. He was arrested for several offenses, like auto theft and burglary.

Travis’ life took a turn when in 1975 Randy Traywick won a talent contest at the Country City USA nightclub. The club’s owner took an interest in the young performer and hired him as a cook and singer. He continued to work at the nightclub in the late 1970s. The owner, Elizabeth Hatcher later tried to keep him out of trouble and became his manager.

In 1978, Randy recorded his first album Randy Traywick with Paula Records. He released two singles, but they were not successful. During this time, Travis moved in with his manager to focus on their work. This put a lot of strain on her marriage, and Hatcher eventually divorced. In 1982, the two moved to Nashville, Tennessee. During this time, the client-manager relationship developed in a romance and they eventually married in 1991.

After his first albums failure, Travis did not do very well. In the 1980s, his albums were rejected by the big record labels in Nashville. His demo tapes were often criticized as being too country. At the time, Travis took a job at a nightclub, The Nashville Palace. He started to perform as a singer, and also worked as a cook. In 1982 his luck turned, when the record Live at the Nashville Palace helped to secure a deal with Warner Bros. Records. In 1985, his single “On the Other Hand’ was released and reached No.67 on the country charts. The next single “1982” became a Top 10 country single.

Besides his projects, Travis also took part in Voices That Care- a production of a single to raise money for troops in the Gulf War. He also recorded the song “Point of Light” to support President George H.W. Bush program Thousand points of light.

Travis had always had an interest in acting. In 1992, he took a break from music and starred in several Western-genre films. Two years later, he returned to the music scene with his album. This Is Me. After the release of this album, Travis parted ways with Warner Bros and signed with DreamWorks Nashville.

In 1999, Travis made a change in his musical style, shifting from mainstream country to gospel. He recorded the albums Inspirational Journey, Rise and Shine and Worship & Faith. In 2007, he also released a Christmas album Songs of the Season. Travis’ song “I Told You So” was released by Carrie Underwood in 2009, and peaked at No. 2 on the country charts. The same year, Travis also released a compilation of his greatest hits. In 2016, he was selected as one of the 30 artists to appear in the Forever Country music video, which celebrated the 50 years of the CMA Awards.

After a 19 year long marriage to Elizabeth Hatcher, the couple divorced in 2010. They also ended their business relationship. In 2015, Travis remarried to Mary Davis.

Travis had some legal issues in 2012. He was once found in a parking lot in his car, with an open wine bottle and smelling of alcohol. The same year, he was found without any clothes on, lying on the road in Grayson County, Texas. He had crashed his car in a construction zone and later threatened the lives of police officers. He was arrested for driving while intoxicated and threatening a public servant.

In 2013, Travis was admitted to a Dallas hospital with viral cardiomyopathy and suffered a stroke. He had to undergo brain surgery to relieve the pressure on his brain. Since then he has not been able to sing or speak and has trouble walking. In 2016, after three years of rehabilitation, it was reported that he recovered his voice and can sing again. In 2016, Travis was inducted into the Country Music Hall of Fame.