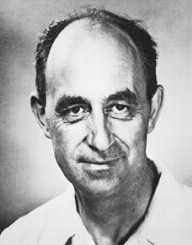 Enrico Fermi, the Nobel Laureate Physicist, considered as the Architect of the Nuclear Age and Father of the Atomic Bomb, was born in Rome, Italy on 29 September 1901. He was the third child of Alberto Fermi and Ida de Gattis. Alberto Fermi was working as a Division Head in the Ministry of Railways and Enrico’s mother Ida de Gattis was an elementary school teacher. He had two elder siblings; a sister named Maria and a brother named Giulio.

From his early childhood days, Enrico developed a keen interest in playing with mechanical and electrical toys and preparing electric motors, a passion he shared with his brother. Unfortunately, Giulio, his brother, died when Enrico was only 14 years old.

Noticing his interest, passion, and love with the science subjects particularly in physics, his father Alberto and one of his father’s friend gifted him several books on the subject. A book titled ‘Elementorum physicae mathematicae’ encompassing mathematics, astronomy, mechanics, and acoustics was an excellent source of knowledge in his early days.

Enrico Fermi completed his high school graduation in 1918 and applied for admission to the prestigious institute, ‘Scuola Normale Superiore’ in Pisa. The Institute had some strict rules and regulations for entry including an arduous entrance examination. Enrico was required to submit an essay on "Specific characteristics of Sounds" as part of the entrance examination.

His essay on ‘Partial Differential equation for a vibrating rod’ won him the first place in the entrance examination and he was quickly promoted to the Doctoral program. Though in the beginning, Fermi had opted for mathematics as his major, he later shifted to physics.

Enrico obtained his Doctorate in 1922 and secured a scholarship from the Italian Government for studying at the University of Göttingen under the renowned physicist, Professor Max Born in the following year. In 1924, after being awarded a Rockefeller Fellowship, he went to work in Leiden in the Dutch province of South Holland.

Enrico Fermi started his professional career as a Lecturer in Mathematical Physics and Mechanics at the University of Florence, Italy in 1924 and continued to teach there for the next two years. In 1927, he moved back to Rome, his place of birth after securing a Professorship at the Sapienza University of Rome.

Enrico published a textbook called ‘Introduction to Atomic Physics’ in 1928, and it is considered as the most important book on the subject providing useful and elaborate information to the University students in those days. His commitment towards increasing the knowledge of Physics and numerous promotional lectures on the subject unfurled a wave of popularity around the world. Soon overseas students started coming to Italy for study. Prominent among them was the promising German physicist Hans Bethe.

Fermi's concept of ‘Beta decay theory’ and discovery of slow neutrons was a landmark achievement in the field of Nuclear Physics. In 1938, he chose to immigrate to the United States. This was mainly to protect his Jewish wife from the new Italian racial laws formulated and implemented by the infamous Italian Dictator Mussolini. The rise of anti-Semitism in Italy and the growing fascism was aided and abetted by the dictator. Among the various offers he received from America, he selected the post of Professor at the University of Columbia and continued with the job till 1942.

In 1944 he was offered the citizenship of America, and after receiving the same, Fermi went on to become a professor at the Institute of Nuclear Studies at the University of Chicago. He remained there for the rest of his life.

Enrico Fermi's work on induced radioactivity, where he exposed a previously stable material by specific radiation and thus making it radioactive is one of his most famous works. Currently known as Fermi statistics, the statistical laws were discovered by him in the year 1926.

In December 1942, he created the world’s first nuclear chain reaction reactor, the Chicago Pile I. The 100th element in the periodic table, Fermium, is also named after Enrico Fermi.

In 1928, Enrico Fermi married Laura Capon, daughter of a prominent, respected Jewish family of Rome. The two met at the University of Rome where Laura was a student in the general science department. They had a son, Giulio, and a daughter named Nella.

In 1954, Enrico Fermi was diagnosed with the incurable stomach cancer. Though he was treated with various medical procedures available at that time, he could not be relieved from his sufferings. He died in his sleep on November 28, 1954, at his home in Chicago, Illinois where he spent the last few months of his life.

The United States Atomic Energy Commission instituted their highest honor, the Fermi Award, in recognition of Enrico Fermi’s immense contribution in the field. There are some well-known scientists including Otto Hahn, Robert Oppenheimer, Edward Teller and Hans Bethe, who received the coveted award since its inception in 1956.