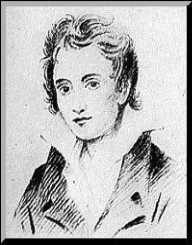 Percy Bysshe Shelley was born in Horsham, West Sussex, England August 4, 1792. He was an English romantic poet. He wrote classic poems and verse dramas. He died even before he was thirty years old.

Percy Bysshe Shelley was born on August 4, 1792, in Field Place near Broadbridge Heath. He was born to Sir Timothy Shelley who was a Member of Parliament and also an associate of Duke of Norfolk and Elizabeth Pitfold. He was brought up alongside five siblings. He began his education at home under Reverend Evan Edwards. In 1802, he joined Syon House Academy of Brentford in Middlesex. Two years later he shifted to Eton College. In the college, he refused to serve the senior boys and thus he was exposed to physical and mental bullying by the older boys. He started declining in his academics, but he developed an interest in science and started writing verses as well. In 1810, he passed out of the college. Percy later joined University College, Oxford. He only studied for one year before he left the establishment.

In 1810, Percy published his first novel ‘Zastrozzi’ which was Gothic in nature. He also poetry a poetry book titled ‘Original Poetry by Victor and Cazire.’ He wrote the poems with his sister while he was still studying at Eton. He also wrote the novel ‘St. Irvyne’ which was published in 1811. He published his fourth book ‘Posthumous Fragments of Margaret Nicholson’ in the same year. He later took out the pamphlet titled ‘Necessity of Atheism’ which he distributed with the help of his friend Hogg. In 1811, Hogg and Percy were expelled from Oxford due to the pamphlet that they had distributed. His relationship with his father became so bad after he was expelled from Oxford. He cut ties completely with his father when he eloped with Harriet Westbrook who was from an unequal class as him.

He later married Harriet, and they traveled to Devon and then North Wales. They decided to settle in Keswick where he met William Godwin and Robert Southey.  He also wrote the poem ‘Queen Mab: A Philosophical Poem.’ In 1812, he went to Dublin where he wrote the pamphlet ‘An Address to the Irish People’ where he presented the rights for Roman Catholics and the autonomy of England.  He later met Mary with whom he eloped with to France. Percy was indebt so he decided to move from place to place to avoid his debts. In 1815, his grandfather died, and in his will, he was forced to grant him an annual income and the payment of his debts. Percy being free from debts now concentrated on writing. He wrote ‘Alastor’ while living in Surrey. He also wrote poems such as ‘Hymn to Intellectual Beauty’ and ‘Mont Blanc: Lines Written in the Vale of Chamouni’ among others. Other works attributed to him include ‘The Revolution of the Golden City,’ ‘Ozymandias,’ ‘On Love’ and ‘Rosalind and Helen.’

In 1811, he married Harriet Westbrook with whom he had two children. In 1814, he abandoned Harriet and eloped with Mary Wollstonecraft Godwin who was a novelist, but he provided financial support the Harriet and their children. In 1816, Harriet committed suicide, and in the same year, Percy married Mary. The couple had a son together, Percy Florence Shelley. He died on July 8, 1822, in Italy. He died while at sea.