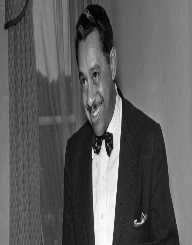 American jazz singer and bandleader Cab Calloway was born on the 25 December 1907 in Rochester, New York. His father was a lawyer and his mother a teacher, and he was raised in a comfortable home in Baltimore, Maryland. At a young age, his parents encouraged his love of singing by arranging singing lessons. He also showed talent as a basketball player.

Cab Calloway’s parents encouraged him to become a lawyer, like his father. He enrolled to study law at Crane College in Chicago, Illinois but he was preoccupied with his music and did not graduate, concentrating instead on his musical career.

During his time as a law student in Chicago, Cab Calloway started playing in the clubs around Chicago. Around this time he met trumpeter Louis Armstrong at the Sunset Club, and they became friends. It was Armstrong who taught him to sing in the scat style. After leaving law school to focus on his music, Calloway sang with the Alabamians. A talented basketball player, around the time he gave up law school, the Harlem Globetrotters made an offer, but he did not take it up.

In 1925, his sister Blanche who was also a singer, arranged for him until Cab Calloway appears in Plantation Days. By 1928 he was a bandleader in Chicago. Calloway moved to New York in 1929 with his band the Alabamians. Initially, the group had a gig at the Savoy Ballroom, but they were not particularly well received. As their concert was ending, the Savoy held the Missourians; another new band beat a Battle of the Bands competition and the Alabamians. Calloway was voted as the better of the band leaders, and later the two groups merged, and Calloway became the leader of the band named Cab Calloway and His Orchestra.

In 1931, Cab Calloway recorded Minnier the Moocher. The song was a huge hit, selling over a million copies. It was co-written with Irvin Mills (Duke Ellington’s manager between 1926 and 1939) and Clarence Gaskill. The success of Minnie the Moocher meant that the band was kept busy and soon they were touring across North America and Europe. They became one of the highest-paid acts in the jazz world. Other hits during the 1930s and 1940s include Moonglow (1934), The Jumpin Jive (1939) and Blues in the Night (1941). Calloway appeared in films such as The Big Broadcast (1932), The Singing Kid (1936) and Stormy Weather (1943).

Once the big band era drew to a close in the late 1940s, Calloway’s band broke up, but he continued playing in smaller groups and also appeared on the stage. Cab Calloway was in George Gershwin’s Porgy and Bess playing Sporting Life, a role based on his performing style. The show toured widely and was a massive hit. In 1967, Calloway appeared on Broadway with Pearl Bailey in Hello Dolly! His daughter Chris Calloway (b.1945-d.2008) was also on the show. He was in Janet Jackson’s 1990 video Alright and had a role in The Blues Brothers (1980) when a new generation discovered him.

Cab Calloway was awarded a National Medal of the Arts in 1993. The same year, the University of Rochester awarded him an honorary doctorate of Fine Arts. In 1987 he was inducted into the Big Band and Jazz Hall of Fame. The Cam Calloway Orchestra, directed by one of his grandsons, CB Calloway Brooks, was formed in 1998 in his honor. In 1999 Calloway was inducted into the Grammy Hall of Fame for Minnie the Moocher (1931), and in 2008 he won a Grammy Lifetime Achievement Award.

Cab Calloway married his first wife Wenonah Conacher in 1928, and they divorced in 1948. He then married Zulma MacNeal in 1949, and they remained together until his death in 1994.

Calloway was the author of the Hipsters Dictionary and also wrote an autobiography Of Minnie the Moocher and Me (1976).