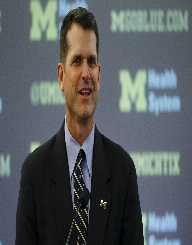 Jim Harbaugh was born on December 23, 1963, in Toledo, Ohio, USA. His parents are Jackie and Jack Harbaugh. His siblings are John and Joani Harbaugh.

After graduating from high school, he attended college at the University of Michigan. While there, he continued to play on the football team until the team of his senior year. In 1987, he was scouted by the Chicago Bears and invited to join their team, an offer which he couldn’t refuse.

Jim Harbaugh played for the Chicago Bears for several seasons between the time he was recruited until 1994. During his time with the Bears, he did not play as much as he would have liked to, but this was mostly in part to the fact that he was new to playing professional football.

In 1994, he was traded to play for the Indianapolis Colts. While at this time, he spent considerably more time on the field than he had the opportunity to with the Bears. It was during his time on this team that he was able to show off his football skills. While on this team, he was almost able to lead his team to the Super Bowl. He stayed on this team until 1997.

In the last few years of the 1990’s, Jim Harbaugh spent a year playing for the Baltimore Ravens. He then spent two years playing for the San Diego Chargers before officially retiring in 2000.

After only taking a short two-year break from working, Jim Harbaugh became the quarterback coach for the Oakland Raiders. However, he only did this until 2004. It was in that year that he moved to instead coach a college football team: The University of San Diego’s Toreros. He worked here with his father for three years.

After leaving San Diego, Jim Harbaugh began working for Stanford University. While working at this school, he had some of his best college football coaching years. He led his team to many victories until he left the school’s team coaching position in 2010.

Beginning in 2011, Jim Harbaugh began coaching the San Francisco 49ers. When he first began coaching the team, they were in poor condition. However, soon after Jim Harbaugh took over as the coach, the team was able to make it to the Super Bowl. Even though the team lost the match, it was still an accomplishment to even play in a competition that heated. The team continued to do well until about 2014 when several team members suffered injuries and Harbaugh was facing difficulties with the team’s offices.

After leaving the 49ers, he began coaching at the University of Michigan, where he continues to coach as of 2017.

All of Harbaugh’s awards are for either playing or coaching football. Some of his most impressive awards are listed below.

Jim Harbaugh was married to his wife, Miah Harbaugh, in 1996. However, the marriage ended in 2006. He later married Sarah Feuerborn in 2008. This couple is currently still married. He also has seven children: Addison, Grace, Jack, James, John, Jay, and Katherine.