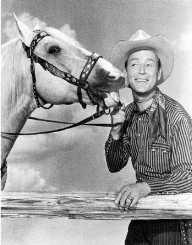 It wasn’t a mistake that Roy Rogers came to be declared as the Ruler of the Cowboys in the 90s.His voice uttered a soft mellow that drastically changed the way people viewed the musical Western. He used to deck out in some of the fierce rococo cowboy shield and a tan-colored horse. Roy Rogers, the King, was not merely known for his stance, but deep compassion. His sensitive nature seemed to be unending as he traveled far and beyond to touch other people’s lives. He was a regular visitor for homeless and sick children who needed help. Roy Rogers will continue to gallop into our souls as a famous movie cowboy. But in a real sense, he was a steady man who we knew we could count on and did what was expected. If you haven’t yet endorsed his tonality, The Roy Rogers Show should ring a bell.

On November 5, 1911, Leonard Franklin Slye was born in Cincinnati, Ohio to Andrew Slye and Mattie Womack-Slye. He was the third child of four siblings and the only boy child. Andrew worked for the US Shoe Company in Cincinnati, while his mother was an excellent homemaker. At one year old, Roy’s family moved to a houseboat that was locally built by his father. In 1920s Roy’s family moved to California where he held odd jobs including working at a local factory and picking fruits. He was introduced to the music industry by his cousin, Stanley. They went along together and started to play at local theaters and square dances. After a while, Rogers met with Tim Spencer and Bob Nolan, with whom they began to play as a team. The nicknamed the group as ‘Bar-O Cowboys.' The group band passed through several auditions that they even appeared in motion pictures.

After forming a ‘Bar-O Cowboys’ band in 1932, Rogers went to work with a Western cowboy music group. Afterward, they formed a group called ‘Sons of the Pioneers’. The team produced songs like ‘Tumbling Tumbleweeds’ and ‘Cool Water.' In 1935 Roy made several appearances with his singing talent in films like ‘The Old Homestead’ and Slightly Static.'

Early in 1938, Rogers became an American Idol when he was among the few who replaced Gene Autry. He appeared in movies like ‘Billy the Kid Returns’ and Under Western Stars.' From 1939 to 1940 Roy gave remarkable hits like The Arizona Kid, Frontier Pony Express, Saga of Death Valley and Day of Jesse James. The ‘Dark Command’ supporting role made Rogers garner box-office uproar the same year he released Young Buffalo Bill movie.

‘The Roy Rogers Show’ was the first television series that Roy launched. He partnered with his wife, Pat Brandy, and Evans. His dog bullet and horse Trigger were also seen on the show. The same period they appeared in a comedy program titled ‘The Roy Rogers and Evans Show.' The program showed good results at the beginning but all went haywire after three months, and they were forced to close down.

In 1970s Roy kept his fame on television where he came to appear in several motion pictures. In 1977 Rogers presented himself as a guest on Wonder Woman’s episode-The Bushwhackers. Early in the 1970s, he allowed Marriot Corporation to convert their location name from Hot Shoppes to Roy Rogers Restaurants. At the end of his career, Roy centralized more on his Hollywood Production company. The process made him perform the CBC western series known as the Brave Eagle.

Roy Rogers married Grace Arline in 1936, and the couple was blessed with two children; Roy, Jr. and Cheryl Darlene. In 1946 Grace died due to childbirth complications. He later married actress Dale Evans in 1947 till his death. They had a daughter who died after two years due to Downs Syndrome. They then adopted seven children together. On July 6, 1998, Roy Rogers died in California due to congestive heart failure. Evans passed away after three years. Evans and Rogers carried a heavy cross when it came to matters than concerned charities. They concentrated more on children’s charities because of the sudden demise of their daughter at the age of two. Roy will always be remembered as the man of the people.