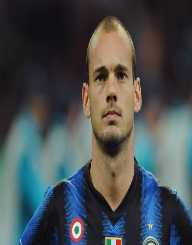 Wesley Sneijder was born on 9th June 1984, in Utrecht, Netherlands. He was born into a football family – both his father and older brother played football, and his younger brother currently plays for Dundee United, a club in Scotland.

Wesley Sneijder was only seven years old when he left home and joined the youth academy to hone his football skills as a youngster.

Wesley Sneijder signed with AFC Ajax, just as his older brother had done. He started at the world-renowned youth academy and played his junior career from 1991 to 2002. He was then signed on for a trial with the team in 2002. Sneijder debuted in February 2003, and the team had an emphatic win again Willem II. Sneijder straight away became a regular in the team, and only two and a half months later, he lined up in the quarter-final match against A.C. Milan in the Champions League.

Wesley Sneijder was a regular goalscorer and played with Ajax until August 2007, when they agreed to sell him to Real Madrid, for 27 million euro.

In his first season at Real Madrid, Wesley Sneijder scored nine goals, and Real Madrid retained their league title. At the start of his second season, Sneijder sustained what was expected to be a serious knee injury. An MRI was done, but fortunately, the injury was not as severe as expected. Sneijder recovered earlier than expected and was in the starting team for the Champions League game against Juventus.

In August 2009, Wesley Sneijder was sold once again, this time to Internazionale, reportedly for 15 million euro. He made his debut for the team the very next day after he was signed over. Sneijder continued to kick goals, and make an impact in his games. At the end of the 2010 season, Sneijder negotiated a five-year deal with Internazionale, which would take him through to 2015 with the club.

Unfortunately, Wesley Sneijder had issues with Internazionale whilst negotiating the contract, so he agreed instead, to a three and a half year deal with the Turkish team, GGalatasaray He signed in January 2013 for the sum of 7.5 million euro.

When his plane touched down in Istanbul, Wesley Sneijder  had thousands of fans from Galatasary meet him at the airport. He had a very positive impact on the club from the outset, since starting to play in 2013, and has signed a contract extension which will take him into 2018.

As well as playing for his club, Wesley Sneijder  also competes on the international stage for his country, the Netherlands. He started as a junior, but in senior football, he has taken his team to several Euro finals, and also participated in the 2006, 2010, and 2014 World Cups.

Wesley Sneijder  married Ramona Streekstra in 2005, and the couple had a son together. They divorced in 2009.

In 2010, he married Yolanthe Cabau van Kasbergen, an actress and television presenter. They have two sons.