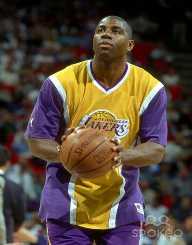 Ervin Johnson, Jr was born to Ervin Sr and Christine, on Aug.14,1959, in Lansing, Michigan. Ervin Sr was a worker in General Motors while Christine worked in a school. Ervin Sr was duty conscious and never missed his duty at General Motors. During the night, he worked as a building caretaker. Ervin Jr helped his parents in their job of cleaning.

Ervin Jr watched, as a young boy, many great basketball plays and evinced interest in that sports. He also played basketball all day to have mastery over the sports. Ervin came from a family of athletes. His parents were also basket players in their younger days.

Ervin, even as an eighth-grade student aspired for a future for him, as a basketball player. During his study at the junior high school, he played basketball. He once scored 48 points in a game.

In Everett, High School, many of the white students ignored his playing skills, given the prevalent racism. The black students formed a small group and looked to him as their leader. Johnson, as a student of the second year playing for Everette High School, scored 36 points. He earned his nickname, Magic, for this scoring for his performance in Everette High School. In his final season at Lansing Everett, he scored a record led the team to victory in the State Championship Game.

This victory was dedicated to his late friend, Reggie Chastine. Magic Johnson was considered as the best player at that time He was selected as one the players in 1977, for McDonald’s All-American Team.

During the 1978-79 season, Michigan State qualified for NCA Tournament and played against Indiana State. They defeated Indiana. Magic Johnson was selected as Most Outstanding Player of Final Four. In 1995 he played in Jud Heathcote All-Star Tribute Game. He scored the best scores

In 1979 Magic Johnson was selected by Los Angeles Laker. He played so well that he was selected to the NBA All-Rookie Team and became an NBA All-star Game starter. The Lakers reached the 1980 NBA Finals and faced Philadelphia 76ers. He won the NBA Finals

Magic Johnson suffered an injury in his left knee and missed several games. Johnson played now and then because of the knee injury. But he received a Standing Ovation when he played.  He used this opportunity to Inspire HIV patients.

In 1981, Johnson entered a 25-year contract with Lakers. There were some differences in the team. Despite this, Johnson was voted a member of All-NBA Second Team. Lakers played against Philadelphia for the second time. Johnson won his second MVP Award. Johnson was again nominated for his All-NBA Team.

During 1985-86, NBA season, The Lakers reached Western Conference Finals but lost to Houston Rockets. In the next season, Magic Johnson had His MVP Award. The Lakers met Celtics in NBA Finals for the third time and won the game. Johnson in Los Angeles defeated Boston six times to get his third Finals MVP Award.

During the period 1987 –91, Magic Johnson played several games and won his fifth NBA Championship and his third MVP Award as well.

In 1991-92, Johnson tested positive for HIV and decided to retire and dedicate his life to battle this disease. He had a come back to the games again He played for 1992 NBA All-Star Game despite his retirement. Johnson played for the 1992 Summer Olympics for US Basketball Team.

The Team was also called the Dream Team. The Dream Team consisted of famous players like Michael Jordan, Charles Barkley, and Lord Bird. This Team was at the top of the competition and won the Gold.

Magic Johnson decided to return to the active game. He took up an assignment as Coach for Lakers for 1993-94 NBA season. He again announced his retirement.

Magic Johnson ran several businesses and also was a commentator for NBC. He toured Asia, Australia, New Zealand. He formed a team, Magic Johnson All-stars, including players of former NBA and college players.

In 2010, Magic Johnson and his earlier NBA players played a basketball game with President Barak Obama as an exhibition match. This game was played as part of 49th Birthday Celebration of Barak Obama.

Magic Johnson and Melissa Mitchell had their first son, Andre Johnson, in 1981. Andre was looked after by her mother. Johnson used to visit her.

Johnson married Earlitha Cookie Kelly. They had one son, Ervin III. They also adopted a girl child daughter Elisa in 1985.

Johnson is a resident of California. Johnson started his own business, Magic Johnson Enterprises and a large number of subsidiaries. He has a business interest in many business groups

Magic Johnson is a supporter of Democratic Party in the USA. He supported Hillary Clinton and Barack Obama in their campaign for Presidential election Illness.

Magic Johnson authored a book on Safe Sex. Other books are My Life, 1992, 32 Ways to be a Champion in Court. Authored with Larry Bird, in 2009, a book entitled, When The Game was Ours, explaining their experiences in Court.,

Magic Johnson participated in 1992 Olympic in a Team Completion.

Magic Johnson achieved several awards to his credit’ To mention a few: