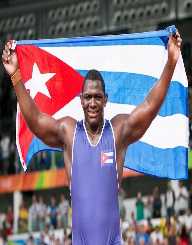 Mijaín López is Cuba’s most decorated Greco-Roman wrestler and Olympian. He is one of three wrestlers to win three Olympic gold medals in the history of the discipline.

Mijain Lopez Nunez was born on August 20, 1982, in Los Palacios, in Pinar del Rio, Cuba. He grew up in Los Palacios in the northern part of Cuba. He took up the sport at the age of ten. His had a stronger physique than most of his peers. His large body stature earned him the nicknames, The Kid or The Terrible. Lopez proved a formidable wrestler on the wrestling mat and sent fear in most of his peers. He began wrestling with boys older than him. The older competition gave him an upper hand and bolder experience when he returned to wrestle his age mates during junior tournaments.

Lopez debuted on the international stage in 2002 at the age of 20 years. He competed in the world championships in the 120 kilograms category and came in a distant thirteenth place. He competed again in 2003 and ranked sixteenth.

After the double loses in his first outings, Lopez recovered and found his first international win in 2003. He represented Cuba in the Pan American Games held in Santo Domingo in the Caribbean. He won his first medal of any international championship in the 120 kilograms Greco-Roman discipline. In 2007, he won again in the same category in the championships held in Rio de Janeiro in Brazil. Lopez won the title for the third time when the tournament was held in the coastal city of Guadalajara in Mexico 2011. In 2015, he moved to the 130-kilogram category. As expected, Lopez took the championship gold in 2015. This time the games were hosted in the Canadian city of Toronto.

The next Pan American Games are expected in 2019. Lopez is expected to join the Cuban team in the competition. As he aims to defend his title, many challengers will be aiming to dethrone the four-time gold medal winner in the 120-kilogram category.

After two dismal performances in early 2000, Lopez went back to the championship buoyed by the winning experience in the Pan American Games. He represented Cuba in the 2005 World Championships held in Budapest, Hungary. He participated in the 120-kilogram category. He won his first gold medal of the championship. The following year, the competition went to Guangzhou in China. This time Lopez came in second best earning a silver medal.

He entered into the 2007 tournament held in Baku in the former Soviet republic of Azerbaijan. He reclaimed the gold medal he lost the previous year. He traveled to Herning, Denmark for the 2009 championships. Lopez retained his gold medal in the 120-kilogram category. In 2010, he represented Cuba in the championships held in the Russian capital Moscow. He took the gold medal for the third straight time since 2007. Lopez experienced a setback in 2011. He got beaten to the second position in the games held in the Turkish city of Istanbul.

He left the 120 kilograms category to join the highest category of the discipline, the 130 kilograms competition. He traveled to Tashkent in Uzbekistan in 2014. He won the gold medal in the games in the super heavyweight category. When the games were held on the American continent, Lopez defended his title. He traveled to the US city of Las Vegas and lost his title. He came in second earning a silver medal.

Lopez first participated in the 2004 Olympic Games held in the Greek capital city, Athens. Despite his success in the Pan American Games, Lopez did not make it to the podium. He came back four years later and competed in the 120-kilogram category in the 2008 Beijing Olympics in China. He won the first Olympic gold of his career. He returned to the London Olympics to defend his title. Lopez retained his gold medal in 2012.

The Olympic champion entered the games when they were held on the American continent. Lopez traveled to Rio de Janeiro in Brazil in 2016. He participated in the super heavyweight 130-kilogram category. Lopez won his third gold medal, making him the only third person to win gold in three wrestling Olympic meetings.

Lopez created a cult following in Cuba after his third gold. He joined the league of other celebrated Cuban athletes like high jumper Javier Sotomayor, long jumper Ivan Pedroso and the host of legendary Cuban boxers. He got the honors of being the Cuban flag bearer in the opening ceremonies of the three Olympic Games in Beijing, London, and Rio de Janeiro. Like other Cuban Olympians before him, Lopez has been honored by the Cuban government on several occasions.

Lopez still trains at the Cerro Pelado in Havana, Cuba. He attributes his success to his hard work and the support of his coach Pedro Val. Lopez stands out with a dominating physical stature of six feet six inches and weighs 131 kilograms. He is still training for future tournaments. The wrestling fraternity is waiting to see what the most decorated wrestler of the current generation still has to offer.