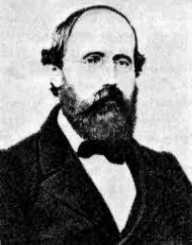 Bernhard Riemann was a mathematician and philosopher from Germany. His career was filled with exceptional insights into number theory and complex numbers. Riemann also produced several interesting results in differential geometry. Like the great Srinivas Ramanujan, Riemann’s brilliant career ended quite early when he died at an early age of 39 from tuberculosis.

Before that, he created a lot of material that guided future research in mathematics and was even used in Einstein’s groundbreaking theory of relativity.

Riemann was born on September 17, 1826, in Breselenz, Germany. His full name was Georg Friedrich Bernhard Riemann. His star sign was Virgo. Riemann came from a very poor family, and his father was a Lutheran minister. His parents Friedrich Bernhard Riemann and Charlotte Ebell produced six children – Riemann was the second eldest. His mother died when he was very young.

Riemann was homeschooled till he was ten years old. Afterwards, a local school teacher, Mr. Schulz took charge of his education. Riemann impressed Schulz with his mathematical skills and was sent to Hanover in 1840 for better education. In 1842, his grandmother died, and he enrolled in Johanneum Luneburg – a gymnasium School. Apart from Mathematics, he learned Hebrew and theology there. The director of the gymnasium was impressed by Riemann’s mathematical prowess and lent him books to study from. Riemann read them all quickly. Riemann went to the Univesity of Gottingen and also studied under the great Johann Carl Friedrich Gauss and Moritz Stern.

Riemann graduated from the University of Berlin in 1849 after studying under Jacobi, Steiner, Eisenstein and Lejeune Dirichlet. For his doctoral thesis, Riemann worked on complex variables with advice from Gauss and developed the theory of Riemann surfaces. He got his Ph.D. in 1851.

Riemann joined the University of Gottingen as a Privatdozent in 1852. He also began working free of cost for Weber. Riemann completed his habilitation by working on some unfinished work left behind by Fourier and developed the idea of n-dimensional Riemannian manifold. Riemann believed that space doesn’t need to be limited to three dimensions only and can be extended to infinite dimensions. He published his Theory of Abelian Functions in 1857 – considered to be one of the most important works in mathematics. In the same year, he was appointed as an Extraordinary Professor at the University of Gottingen.

In his career, Riemann made significant contributions to the theory of functions, complex analysis, and non-Euclidean geometry. The math he developed was crucial in Einstein’s theory of relativity. After 1861, his health began to deteriorate. He went to Italy for treatment but came back a year later. Seeing no improvement in his health, he relocated to Selasca, near Lake Maggiore. He wrote a lot of papers but published very few of them due to his untimely death. They were all published together 26 years after his death, in 1892.

Georg Bernhard Riemann fell in love with Elise Koch, who was a friend of his sister. They married on June 3, 1862, and produced a daughter named Ida. She was born in Pisa in 1863.

Riemann contracted tuberculosis – possibly very early in his life. But, after his marriage, it took a severe form. Before it was diagnosed, he had already become very sick, and any improvements through medical treatment were temporary.

Riemann continued to work, even when he was ill and this worsened his condition. He died on July 20, 1866, with his wife sitting next to him.He was 39 years old. To honor his memory, a lunar crater is named after him.