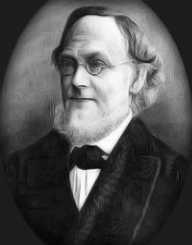 Hugo von Mohl was born 8th April 1872, in Stuttgart, Germany. He was one of four children, all boys. His father was Benjamin Ferdinand Hugo von Mohl, a statesman in Wurttemberg. Both his father and his mother were connected to the upper echelons of Wurttemberg society.

Hugo von Mohl did his education at the gymnasium, followed by admission into the University of Tubingen in 1823. He studied medicine and graduated with distinction. Over the years, from a young age, von Mohl spent his spare time studying botany and mineralogy.

graduating, Hugo von Mohl moved to Munich, where he joined a prominent group of botanists and continued with his botanical research.

In 1832, he was appointed to the position of Professor of Botany at the University of Tubingen. Hugo von Mohl remained in the position until he retired at the end of his career.

Hugo von Mohl loved his research, and even his teachers couldn’t influence him when it came to botany. His thoughts remained independent.

He made significant contributions to many areas of botany, but his most famous work was in conjunction to plant cells and microscopic anatomy of plants. Hugo von Mohl put forward the proposal that new cells were formed by cell division. This was after he observed algae. The depth of his knowledge was recognized when his theory was adopted instead of the free-cell-formation theory by Schleiden that had been in place until that time.

Hugo von Mohl wrote scientific papers for over 40 years, including his research results on the structure of palms, cycads and tree ferns. His findings are still the basis of knowledge used in these areas.

In 1843, Hugo von Mohl established a weekly publication, called Botanische Zeitung. He was the joint editor of the publication until he died.

Hugo von Mohl was recognized with numerous awards and honors, some of which include:

1843:   The Order of the Crown of Wurttemberg – conferring a title of nobility

1850:   Elected as a Foreign Member of the Royal Swedish Academy of Sciences

1868:   Elected as a Foreign Fellow of the Royal Society