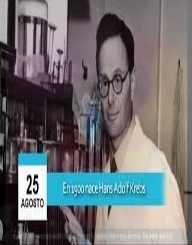 Hans Adolf Krebs was born on August 25, 1900, in Hildesheim, Germany to George and Alma Krebs. His father was an otolaryngologist (Ear, Nose and Throat Surgeon) by profession. He had an elder sister, Elisabeth and a younger brother Wolfgang. He studied at the famous old Gymnasium Andreanum in his hometown. When he was six months short of completing his secondary school education, he was conscripted into the Imperial German Army. It was September 1918 and the World War I was nearing its end. He was allowed to appear in an emergency examination to receive his higher school leaving certificate. He got such good grades that he suspected the examiners to be too lenient and considerate.

With the First World War ending in November 1918, Hans Adolf Krebs' conscription also came to an end. In December 1918, he entered the University of Göttingen to study Medicine with the aim of pursuing his father’s profession. He was transferred to the University of Freiburg in the following year. It was at this University; Krebs first met with his teacher Wilhelm von Möllendorf in 1920. Möllendorf, at that time, was a leading specialist in vital staining.

Hans Adolf Krebs, under the able guidance of Möllendorf, studied the staining effects of different dyes on muscle tissues and in 1923 published his first technical paper on tissue staining technique. He completed his medical course in the same year and went to the University of Berlin to collect his medical license. During 1924, he was associated with the Third Medical Clinic of the University of Berlin. He received his medical license working in the clinic for a year combining clinical practice with experimental work.

However, instead of pursuing a career as a Medical Practitioner, Hans Adolf Krebs turned his attention towards the field of medical research. He preferred the subject of chemistry as his favourite choice of research. He underwent some informal training in chemistry and biochemistry at the Department of Chemistry at the Pathological Institute of the Charité Hospital, Berlin, during 1924. Finally, in 1925, he earned his M.D. degree from the University of Hamburg.

Hans Adolf Krebs began his career at the Kaiser Wilhelm Institute for Biology in Dahlem, Berlin, in 1926. He was appointed as a research assistant at the Institute. He got the opportunity to work with the renowned biochemist Otto Heinrich Warburg and learned the nuances of tissue slice and manometric methods to measure the rate of respiration and glycolysis of cancer cells. He stayed with the Institute for the next four years assisting and learning under his mentor Warburg. During these four years, he published 16 research papers.

In 1930, Warburg felt that he no longer required Krebs’ services and urged him to move on. Krebs took up the position of an assistant in the Department of Medicine at the Municipal Hospital in Altona (now part of Hamburg). He moved to the Medical Clinic of the University of Freiburg the following year. At Freiburg, he had to take care of about 40 patients and was at liberty to follow his research work. In his first year at Freiburg, Krebs in collaboration with a research student Kurt Henseleit hypothesized the metabolic pathway for urea formation, now known as the ornithine cycle of urea synthesis (Krebs-Henseleit cycle).

In 1933, Hans Adolf Krebs was dismissed from his academic post under the Law for the Restoration of the Professional Civil Service promulgated by Hitler after assuming power. Krebs hailed from a Jewish ancestry and under the said monstrous law, all non-Aryans and non-Nazis were to be removed from professional occupations. His admirer Sir Frederick Gowland Hopkins came to his rescue and arranged for his rehabilitation in England.

The University of Cambridge allowed Krebs to work with Hopkins at the Department of Biochemistry on being persuaded by the latter. Krebs settled in Cambridge and with financial support from the Rockefeller Foundation, he was able to continue his research work. He was fortunate enough in bringing his equipment and research samples along with his personal belongings from Germany to England. Among this equipment was the manometer developed by Warburg specifically for the measurement of oxygen consumption in thin slices of tissues. The manometer was vital equipment in the successful conduct of his research.

In 1934, Hans Adolf Krebs was appointed as a demonstrator of biochemistry at the University of Cambridge. In 1935, he was offered the post of a lecturer in Pharmacology by the management of the University of Sheffield. With a provision of more spacious laboratory and double the salary, he accepted the offer and served at the position for the next 19 years. He was elevated to the status of Lecturer-in-charge of the newly founded Department of Biochemistry (now Department of Molecular Biology and Biotechnology) in 1938. He was promoted to the position of Professor in 1945.

During his long tenure at the University of Sheffield, Hans Adolf Krebs worked in collaboration with William Johnson and investigated cellular respiration by which oxygen was consumed to produce energy from the breakdown of glucose. Using the manometer devised by Warburg, the duo conducted experiments on several hypotheses, and after four months of intense analysis, they successfully established the sequence of the chemical cycle. They named it as the ‘Citric Acid Cycle.’ After determining the Citric Acid Cycle, Krebs went on to add more details to it and discovered the glyoxylate cycle, which is an extension and modification of the Citric Acid Cycle.

In 1953, Hans Adolf Krebs was awarded the Nobel Prize in Physiology or Medicine for his discovery of the series of chemical reactions in living organisms known as the tricarboxylic acid cycle. (Also known as the citric acid cycle/ Krebs cycle).

He received the Royal Medal from the Royal Society in 1954.

In 1958, Hans Adolf Krebs was honoured with a Gold Medal by Netherlands Society for Physics, Medical Science, and Surgery.

He was accorded Knighthood in the same year.

In 1961, Hans Adolf Krebs was bestowed with Copley Medal by the Royal Society.

An original member of the Society for General Microbiology, he was conferred with the Honorary Membership in 1980.

Hans Adolf Krebs entered into wedlock with Margaret Cicely Fieldhouse, of Wickersley, Yorkshire, on March 22, 1938. The couple had three children together - two sons named Paul and John and one daughter named Helen.

He passed away on November 22, 1981, in Oxford, England, after suffering from a brief illness.

The Department of Biochemistry building of the University of Oxford was named ‘Hans Krebs Tower’ in his honor.