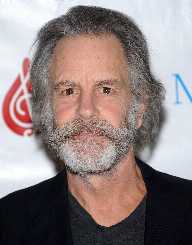 Robert Hall Weir alias Bob Weir is famous for his American music and as a songwriter who has created a legacy with his fantastic music for decades. He is famous for being a founding member of the long-lasting musical rock band, “Grateful Dead”. He carries expertise in playing rhythm guitar and in singing many rock ‘n’ roll as well as country & western tunes.

Bob Weir was born on October 16, 1947, in San Francisco, U.S. and unfortunately this great musician had a very sad childhood. He was born to John Parber and one of his fellow college friends. He was given up for adoption when he was just a baby. He stayed in an adoption centre for a while and was then adopted by a rich Californian Engineer and his wife, Frederic Utter and Eleanor Cramer Weir. He was raised by them in the suburbs of Atherton.

Bob suffered from dyslexia which remained undiagnosed and because of this; Bob had a very troubled childhood. This also became the only reason due to which Bob was expelled from almost every school he attended. He was admitted to Menlo-Atherton high school in Atherton in the beginning but because of his troubled behavior, he was even expelled from there. Later on, he was sent to a boarding school, Fountain Valley School, Colorado. It was this school where he met his future lyricist John Perry Barlow. Barlow worked as the songwriter for the band, “The Grateful Dead”. Bob tried his hands on Piano and trumpet but was not completely happy with both the instruments. When he was 13 years old, he started playing the guitar and it turned out to be his life-long passion.

Bob spent most of his time in the Palo Alto, California where he used to check out bay area rock-folk scenes. He kept on looking for a club to admit them. At Dana Morgan’s music store, Bob met Jerry Garcia who was waiting for his students to arrive. Fortunately, both of them got some time and played music throughout the night. This night changed the lived of both the music lovers as they both decided to form a band. In the year 1964, Bob Weir, Garcia and Ron "Pigpen" decided and formed a band. Weir was just 17 years old at this time. They initially named the band as “Mother McCree’s Uptown Jug Champions”.

The band was later named as the “Warlocks” which was again renamed to the “Grateful Dead” and this band made bought stardom to the band members. Bob worked as the band’s rhythm guitarist. The band also included drummers Mickey Hart and Bill Kreutzmann, bass guitarist Phil Lesh and other keyboardists over the band’s 30-year long history. Session musician Brent Mydland also joined the band as a keyboardist in 1979. The band played almost 100 successful shows every year in the 1970’s. Along with giving performances with the band, Bob also an active participant of other bands like Kingfish in the early 1970’s.

Bob along with the band toured actively until Jerry Garcia died in the year 1995. His death was a big loss for the band.

Weir recently released a new album, “cowboy songs” titled “Blue Mountain” in the year 2016. The album received a huge response and was inspired by Bob’s work as a ranch hand when he was just 15 years old.

In the spring of 2018, Bob along with former Grateful Dead bassist Phil Lesh performed a series of duo concerts.

For the wonderful band Grateful Dead, Bob received a GRAMMY Lifetime Achievement Award in 2007 being one of the legendary founding members of the band. In spite of so many successful musical hits, Bob won his first ever Les Paul Spirit Award from the Les Paul Foundation at the Bonnaroo Arts and Musical Festival in the year 2016.

He also received Lifetime Achievement Award in the year 2016 at the Americana Honors & Awards in Nashville, TN.

In his early years, Bob lived with Frankie Hart for almost 6 years (1969- 1975). They never married each other but still, Frankie started using Bob’s surname and was known as Frankie Weir. She used to work as a go-go dancer as at the Peppermint Lounge in New York and has performed in T.V. shows Hullabaloo and Shindig. She was even Bob’s inspiration behind his song “Sugar Magnolia”.

Weir is on the board of directors of the following organizations:

Bob Weir is a member of the Bohemian Club. Bob along with Peter Shapiro and Seth Rogin is also a member of the Advisory Board of the Jerry Garcia Foundation. He is also a member of the board of directors of the environmental organization Rainforest Action Network, along with Woody Harrelson, Bonnie Raitt, and John Densmore. Not only this, Bob is also on the honorary board of directors of Little Kids Rock. Little Kids Rock is a non-profit organization and it provides free musical instruments and instructions to children in under-served public schools throughout the U.S.

In 2011, Weir founded the Tamalpais Research Institute also known as the TRI Studios.