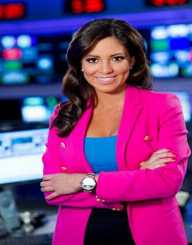 There is a famous quote which states “ Our deepest fear is not the world being inadequate, our deepest fear is that we are powerful beyond measures.” That is really true because once you set your eyes on achieving something, with hard work and dedication, it can be achieved. Satcha Pretto may have had a humble beginning, but today she is one of the Honduran astute journalists of the 21st century. Born on April 5, 1980, Satcha Pretto has maintained a high level of journalisticstandard and her competence as one of the best Spanish-speaking media practitioners in America has never been questioned.

Satcha Pretto works as a co-anchor on the show Despierta America at the Univision Network. Satcha Pretto won an Emmy Award for her displays of professionalism and rising popularity among the Latinos. She has also engaged in several charitable worksusing her fame.

Satcha Pretto had an early career while in high school with the help of the National Broadcasters Association of Honduras who got her a job at the Radio Suprema Stereo in Tegucigalpa. Since Satcha Pretto was new to the industry, she was given an intense three months of training to familiarise in the radio settings as well as arm her with on-air ethics among others. At age 17 and in her school uniform, Satcha Pretto handled her debut radio program. Her show was a three-hour long one. After her tertiary education, Satcha Pretto got commenced her professional career as a reporter and anchor at KTLE-Telemundo’s night newscast in Midland-Odessa, Texas in 2002. Whiles there, Satcha Pretto also reported for KWES-TV channel 9an affiliate to NBC and KTLE’s sister station. Satcha Pretto worked for both stations for a year.

Later in her career, Satcha Pretto was picked a job as a co-anchor at KUVN Channel 23’s newscast Cinco en Punto and also for the night newscast Edición Nocturna. Satcha Pretto extended her work by partnering CNN Cable Network to report for Anderson Cooper 360. As a reporter, Satcha Pretto was proud of interview Isabel Allende, a famous Chilean writer in 2006. In mid-2016, Satcha Pretto was poached by Univision Communication Inc. as their new co-host for their famous news magazine program Primer Impacto-Fin de Semana.

Six months after joining the network, Satcha Pretto hosted broadcast of Roses Parade Tournament, 2007 and once again in 2008. With much experience now and high commitments to the journalistic profession, Satcha Pretto covered various high profile programs including the visit of Pope Benedict XVI’s visit Brazil in 2007 and was among the 70 journalists selected to travel with the Pope on his visit to the United States in 2008. That occasion was history in its own right because Satcha Pretto became the first journalist of a Spanish-language media firm in the U.S. to travel by the Pope on board the same plane.

In 2001, Satcha Pretto competed in a live competition organized by the Texas Intercollegiate Press Association at their Wichita Falls meeting and took the first position in TV announcing. Satcha Pretto received an Emmy Award in 2007 and also an award from Texas Associated Press Broadcasters. In 2006, Vanidades magazine awarded her with a Tribute to Hispanic Women in the journalism category.  Her other recognitions include being among the ten best-dressed celebrities in 2009 and one of 50 most beautiful in 2010, as compiled by People en Espanol magazine Satcha Pretto was appointed as a Smile Ambassador by Operation Smile which was into helping repair childhood facial deformities. It was also aimed at advocating for sustainable healthcare systems for children and families through a public-private partnership.

Satcha Pretto was married to Aaron Butler his long-time boyfriend in 2013. The couple had their first child, Bruch Aaron Butler in July 2014 and their second child; a baby girl was delivered in 2016. She is very active in charity programs to help raise funds for the less endowed.