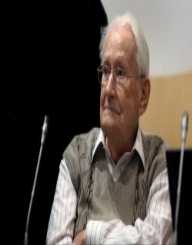 Ever since Oskar Groening was a child, he was highly interested in the military, which could have been because his grandfather was a soldier in his youth. As a child, Groening joined the Scharnhorst, and then joined the Hitler Youth organization just a few years later in 1933.

Oskar Groening graduated from high school in 1938. He then went to train to become a clerk, but he was soon recruited for the German army in 1939.

In 1940, Oskar Groening joined the Waffen SS as a salaried administrator. He held this post until 1942. He was then transferred to Auschwitz, where he worked as a commander. There, he was in charge of taking and storing private property and money of victims in the concentration camps and sending them to Berlin.

While Oskar Groening didn’t like the idea of exterminating the people in the concentration camps, he was still involved with it. He would later deny that he had any truly evil involvement with the Holocaust.

In 1944, his career shifted him from Auschwitz to Ardennes, where he fought on the front lines. Less than a year later, he was captured by British soldiers and put in an old concentration camp (which was then being used as a prisoner camp by the British).

In 1947, Oskar Groening worked at a glass factory. He would continue to work here for several years.

During his lifetime, Oskar Groening has seemed to have mixed opinions on the Holocaust. With a lot of what he has said, he seems to be sorry for what happened during the Holocaust. At the same time, some of his comments also seem to imply that he does not believe he was truly apart of the Holocaust.

However, during the 1980’s, he was working against Holocaust deniers, since he claims to feel guilty about the lives that were lost at Auschwitz. During this time, Holocaust denial was illegal in Germany, but many people still believed that it never happened. Being a part of the terrible events himself, Oskar Groening was able to tell deniers that the Holocaust did happen.

Later on, closer to the 2010’s, Oskar Groening denied any major involvement in the Holocaust. He believes that because he did not directly kill anyone that he is totally innocent. He is one of the many Nazis who claimed something along the lines of, “I was just following orders.” However, just following orders that will lead to getting others killed does not make one innocent.

Throughout all of his comments, it is hard to decide if Oskar Groening is a Holocaust denier or not. He seems to believe that while the Holocaust likely happened, he did not have a part in it (even though there are records of him being involved). His comments go back in forth even today. It seems that he denies it or accepts the facts only when it is convenient for him. Either way, there is evidence that the Holocaust did in fact happen, and that Groening was involved with it.

Decades after World War II had ended, Nazis were still being put on trial for their war crimes (Nazis are still currently (as of 2017) being put on trial for World War II war crimes, even though they are all old men). In 2014, Oskar Groening was arrested for his role in the Holocaust. It was around this time that he denied that he had any involvement in the execution of the Jews and other minority groups executed by the Nazis. However, since there was evidence that he worked as a concentration camp, it was clear that he had some part to play in the crimes, even if he did not personally execute anyone.

In September of 2014, when Oskar Groening was well into his 90’s, he was charged with assistance to murder. Since he helped to earn money for the Nazi cause by collecting valuable objects and cash from the victims at Auschwitz, and the money was used in part to murder the people there, as well as for the general advancement of the violence of the Nazi cause, he was said to be connected to the murders.

The trial took place in 2015. Oskar Groening apologized and was adamantly disgusted with his role in the Holocaust (even though he also denied to be a part of the Holocaust). However, apologies don’t fix murders. He was soon found guilty of being an accessory to murder. He is now known to be a war criminal, which is what he is infamous for.

Oskar Groening is currently (as of 2017) serving a four-year sentence for his crimes. His time will be fully served in 2019. However, since he is in his 90’s, it is likely that he will die before his sentenced time is completed.