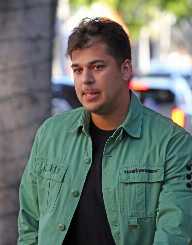 Rob Kardashian was born on the 17 March 1987 in Los Angeles California. His father was Robert Kardashian, Sr. and his mother is Kris Jenner. Kardashian's parents divorced in 1991, and his mother married Bruce Jenner. He has three sisters from mother’s first marriage: Kourtney, Kim and Khloe, he has two stepbrothers, Brandon and Brody, a step-sister Casey and two half-sisters Kendall and Kylie Jenner. Robert Kardashian, Sr. died in 2003 from cancer. He was the lawyer who had defended O.J. Simpson at his trial for the alleged murder of his wife.

Rob Kardashian found fame in the television reality show Keeping Up With the Kardashians and related spinoffs. Rob & Chyna stars Kardashian and his ex-partner Blac Chyna. The show originally premiered on the E! Cable Network in September 2016 as a series of seven one-hour shows. The second series of Rob & Chyna was due to air in 2017, but in March 2017 it was reported that it would not be going ahead.

He appeared in Dancing With The Stars (2011) with Cheryl Burke as his partner. They were the runner-ups.

Rob Kardashian is also an involved in business and has a skincare range and various other ongoing projects.

Between 2007 and 2009 Rob Kardashian was in a relationship with Adrienne Bailon. In 2012 he was dating singer Rita Ora, but it only lasted a few months. He got engaged to model Blac Chyna in 2016 and their daughter Dream Renee was born in November 2016. When their daughter as a month old, Chyna moved out.

Rob Kardashian is a diabetic.