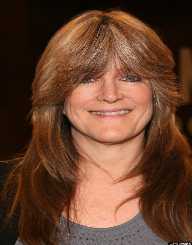 One of the famous Brady kids from the sitcom The Brady Bunch that aired in the 1970s, Susan Marie Olsen is a former child actress who enjoyed great success in her role as Cindy Brady. She currently works as an animal rights activist and is also a former radio show host. She is also an advocate of generating awareness about Asperger’s syndrome.

Susan Olsen was born on August 14, 1961. Her birthplace is Santa Monica, California and her full name is Susan Marie Olsen. Her star sign is Leo. She has three siblings – two brothers Christopher and Larry, and a sister Diane. Olsen began her TV career at a very early age. She started appearing in commercials before she was two years old. When she was 5, she appeared on The Pat Boone Show to sing the Monkees pop song I’m a Believer. She had other small roles in TV shows like Ironside, Gunsmoke, and Julia.

Susan Olsen went to the William Howard Taft School located in California, for her education.

After appearing in several small roles in her childhood, Susan Olsen got her most famous role as Cindy Brady in The Brady Bunch. She beat more than 500 other kids to get the role on this immensely popular show. Cindy was a character who regularly snitched on her siblings, and she was very famous for her curly hair. Olsen became especially renowned for her witty one-liners that made the audience burst into laughter.

In the show too, Susan Olsen was the youngest daughter of six children. Olsen has often said in her interviews that the show was a special memory in her life. She also found it difficult to make real friends early on, as the kids would consider her a snitch in real life as well. The Brady Bunch ended in 1974. However, its episodes are still re-telecast on TV. Olsen appeared in a few more TV shows mainly related to the Brady Bunch franchise including The Brady Girls Get married, The Bradys and The Brady Bunch movie.

As Susan Olsen grew up, she became interested in a career in art and became a graphic artist. She was appointed as the art director in Malibu, for a clothing company. She created Marshmallow Fluff-art and used the Art of Rescue campaign to express her love for animals. Olsen entered into a public controversy when rumors about her getting into a pornographic career spread. She clarified that she recorded some space music for the film, in which another blonde actress was appearing.

Susan Olsen released a coffee table book Love to Love you Bradys in 2009. She has also appeared on Celebrity Ghost Stories. She also hosted Two Chicks Talkin’ Politics till 2016. She was fired after she lost her composure over comments made by actor Leon Acord-Whiting.

Susan Olsen has been married twice. Her first marriage was to Steve Ventimiglia. The marriage lasted only two years – from 1988 to 1990. Five years later, she married Mitch Markell. They produced a son named Michael. In 2004, they separated. She currently lives with her son Michael, who suffers from Asperger’s syndrome and campaigns for increasing awareness about the disorder.