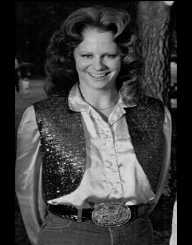 Reba Nell McEntire, singer, songwriter, actress and records producer, was born on March 28, 1955. Her father was a three-time World champion steer roper. Her mother wanted to become a country singer but decided to become a schoolteacher, who taught singing. As a kid, Reba learned to play guitar on her own. She and her siblings loved to sing harmonies and songs their mother taught them, and later formed a vocal group “Singing McEntires.” The crowd chanted songs written by Reba and played mostly in rodeo shows.

Reba McEntire attended Southeastern Oklahoma State University and wanted to be an elementary school teacher. Outside of school, she also continued to sing and perform. In 1976 she was hired to sing the National anthem at the National Rodeo in Oklahoma. That day, country singer Red Steagall was also playing and was impressed by her voice. He wanted to help her to launch her country singing career. In 1975, McEntire signed a recording deal with Mercury Records.

The following year, she released her next album Feel The Fire, which had three singles on the Billboard Top 20. After this, three more albums followed. In 1984 McEntire announced that she was leaving Mercury Records, because of the label’s country-pop production style.

After leaving the Mercury, Reba McEntire signed with Nashville Records in 1984 and released her 7th studio album. She was still unsatisfied with her album's producer since the records had a distinct country-pop sound. She then gathered her previous records of her liking, and they were recorded in a new album. It received good reviews, and McEntire was praised as the top 5 favorite country artists.

Reba McEntire's 9th studio album Whoever’s in New England reached the top 1 on the Billboard Country Chart and won a Grammy award for Best Female Country Vocal Performance. The album was later certified Platinum. She continued to maintain her strictly country style and put a lot of emotions in her work, especially after divorce from her husband.

Her thirteenth album Reba was a step away from her traditional style, it was somewhat contemporary. Although the record did not receive favorable critics reviews, it was on the Billboard top No1 for six consecutive weeks and was certified platinum. The audiences loved her following albums. Her album Rumor Has It eventually reached triple-platinum status.

During her tour in 1991, a tragedy struck Reba McEntire and her group. McEntire performed privately for IBM executives, and the following day her group took a charter jet which crashed near San Diego, California. Eight members of her team, plus the pilot and co-pilot died. The plane crashed on the side of Otay Mountain due to poor visibility. McEntire was devastated by the news. She dedicated her sixteenth album to her dead road band.

Reba McEntire has always shown a talent for acting. In the 80’s her music videos were seen as mini-movies since she always portrayed a different character. During this time, she indeed became interested in acting and hired a manager.

In 1989 she co-hosted Good Morning America on ABC. Her movie debut was in the 1990 movie Tremors. She was also cast for the movie Titanic as Molly Brown but had to decline the role, since she had already scheduled concerts. In 2001, she starred in the lead role of TV show Reba. The show ran for six seasons and won McEntire a golden globe.

Reba McEntire's brother is also a country music singer, but his career was not successful. He operates a 1000-acre ranch. Her sister Susie is a Christian music singer. She and her husband both travel the U.S. performing and speaking. In 1976 she married rancher and steered wrestler Charlie Battles.

When her career started to pick up, in 1987, the marriage collapsed. In 1989 she married her manager and guitar player NarvelBlackstock. The couple formed Starstruck Entertainment together. Blackstock had three children, and McEntire considers them as her own.

Reba McEntire has released a total of 32 albums. She holds the record for the most Academy of Country Music Top Female Vocalist Awards - seven, as well as twelve Favorite Country Female Artist. She is also one of the rare artists to reach the solo number one hits four decades in a row. McEntire also holds the record for ACM Awards nominations with 45 and CMA Awards nominations with 49.