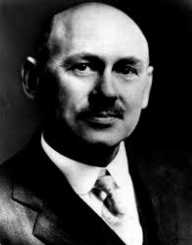 Robert Hutchings Goddard was born 5th October 1882, in Worcester, Massachusetts, in the United States. His parents were farmers, and that helped Goddard acquire an interest in nature.

The family moved to Boston soon after Goddard was born. His father gave him a telescope, and Goddard often studied the sky. He also loved hiking in the outdoors with his father.

America introduced electricity in the 1880s. Due to this, Robert Goddard developed a keen interest in engineering and technology.

He began experiments at home both with electricity and with chemicals.

He began to keep a diary from a young age, writing about his work. At the age of 16, he became interested in space. A year later, in 1899, he decided he would dedicate himself to space flight.

Robert Goddard was a sickly boy and soon fell behind at school because of the time he was away. He became a keen reader to compensate for not being in the classroom.

During this time, Goddard read the work of Isaac Newton. Newton's Third Law of Motion applied to motion in space. Goddard tested the motion and found it to be right. He realized if there were to be space travel, it would come from knowing mathematics and physics.

Robert Goddard returned to school as his health got better. He loved his schooling and studied mathematics, mechanics, astronomy, and composition. Goddard graduated in 1904.

In 1904, he went to Worcester Polytechnic Institute. Goddard then graduated in 1908 with a degree in physics. In 1909, Goddard began his master's degree. He achieved his master's in physics in 1910. His Ph.D. was completed in 1911.

In 1912, Princeton University offered Robert Goddard a research fellowship which he accepted.

Scientific American published his first paper in 1907. The article explained a method for balancing airplanes that used gyro-stabilization.

By 1912, Robert Goddard had worked out the mathematics which would allow a rocket to travel upwards into space.

In 1913, Goddard developed tuberculosis and became very ill. He resigned from his position at Princeton and went back to Worcester. The doctors expected him to die, but Goddard's health gradually improved. This was due to him beginning to get outside into the fresh air and walking to exercise.

Goddard worked for an hour a day as his health improved. As a result, his first two patents were filed and accepted in 1914. The first one described a multi-stage rocket with solid explosive material as fuel. The second described a rocket using solid fuel or liquid propellants as fuel.

These two patents became instrumental in the history of rockets.

In 1914, Robert Goddard accepted part-time work at Clark University. He became a research fellow and instructor. Goddard was also able to continue his research during this time.

He began to experiment and made significant headway over the next three years. In January 1917, after discussions with Goddard, the Smithsonian Institution provided him $5000 over five years. Clark contributed $3500 and their physics laboratory as further sponsorship.

As well as his space travel research, Goddard worked with the United States military in World War I. He developed a rocket from a launcher concept, known today as the bazooka. The Army showed interest, but World War I came to an end, so development did not go ahead.

In 1919, the Smithsonian published Robert Goddard's report called, A Method of Reaching Extreme Altitudes. The scientific community saw Goddard's report as one of the groundbreaking works in rocket science.

Goddard also wrote of probes flying past the moon to take photographs. The press ridiculed him as they often do with new ideas.

In 1924, Goddard published an article in Popular Science. He explained with physics how his speed rocket could propel itself in a vacuum. The media continued to laugh at him.

Although the press and the public laughed, rocketeers throughout the world took him very seriously. Many built their rockets.

Robert Goddard worked alone with his team over the years. Throughout the World Wars, he stopped talking with German rocket experimenters.

Almost 50 years after their ridiculing editorial, The New York Times published a correction. It was the day after Apollo 11 launched. The newspaper mentioned its editorial from 1920. It then went on to confirm Isaac Newton's findings. Finally, it said that a rocket could function in a vacuum as Goddard had written. The newspaper said it regretted the error.

Robert Goddard continued his experiments throughout the 1920s. On 16th March 1926, he launched the first liquid-fueled rocket.

In November 1929, Goddard met Charles Lindbergh. The two formed an alliance that would last the rest of Goddard's life.

Lindbergh sought sponsorship on behalf of Goddard, but due to the stock market crash, funding was impossible to find.

In 1930, Robert Goddard moved to Roswell in New Mexico. He worked with his team for the next 12 years in secret, launching several series of rockets. Goddard launched 35 rockets between 1926 and 1941.

In the early 1940s, Goddard moved to Maryland to work with the Navy during the Second World War.

After the war, Goddard continued to work in secrecy, much to the dismay of other scientists.

Robert Goddard made significant contributions to the First and Second World War efforts. In his later years, Goddard worked with other scientists.

He also joined the American Rocket Society, because he realized he needed others to make more significant progress.

Goddard died on 10th August 1945 after being diagnosed with throat cancer.

Robert Goddard has schools and buildings named after him, as well as streets.

In 1960 the Smithsonian Institution awarded him the Langley Gold Medal.

Goddard had 214 patents covering his work.

In 1924, Robert Goddard married Esther Kisk. She worked as a secretary for Clark University.